Jon Auer - Songs from the Year of Our Demise 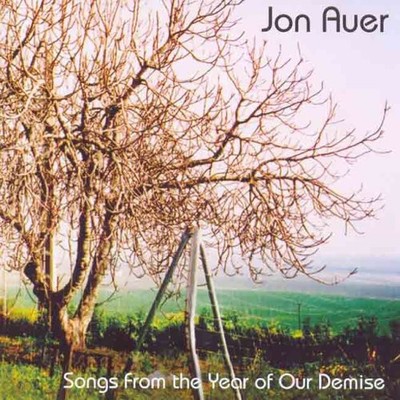 After what he describes as a 'rabidly indulgent marathon of recording,' Jon Auer has completed his first solo full-length CD of original material called 'Songs from the Year of Our Demise.' Although he co-wrote and recorded both a Posies and Big Star album in the interim, 'Songs...' is the record Jon says he's been 'dying to make and release for the last 5 years.' And it's well worth the wait. The record is at turns more gritty and more lush, more atmospheric and more immediate, more universal and more personal than anything he's done in the past. It reflects the highs and lows of both a soaring exuberance and a crushing fatalism. Keyboards, cellos, organs, chimes and gizmos come and go while Jon's signature guitar work and angelic voice consistently echo the emotional turmoil of a past half decade that has seen him recover from a divorce, marry a reacquainted love, and inherit a daughter through that marriage. The album plays like a very personal and revealing musical journal of a period of difficult change. 'When I was working, I kept visualizing the record as a soundtrack to the end of an extremely turbulent era for me,' says Jon. 'I'd had the title and a loose concept for what I wanted it to be since the late '90s but wasn't sure I'd had enough time to redefine myself or move on. It just took me a lot longer to start the process and fill in the blanks than I could have ever anticipated.' Jon's musical journey started in the late '80s in Bellingham, WA, where he formed legendary power pop band The Posies. Their first record 'Failure' was recorded and mixed by a teenage Jon in his father's home studio. Two years later The Posies signed a deal with DGC/Geffen and made four records for them, including the landmark 'Frosting on the Beater,' which includes Jon's classic singles 'Dream all Day' and 'Flavor of the Month' as well as his dark and epic 'Coming Right Along,' which was featured on 'The Basketball Diaries' soundtrack. The Posies are still together and to date have released six studio albums, an e.p., two live albums, a 4-CD box set, and a 'Best Of' collection. They're now signed to Ryko, who released their most-recent CD 'Every Kind of Light' in 2005. The Posies' success has also led to Jon becoming part of the reformed Big Star with original members Alex Chilton and Jody Stephens. The current lineup played it's first show in 1993 and now 13 years later is still touring and has even recorded a new album of originals ('In Space'), whose focus track 'Lady Sweet' was written and sung by Jon. The album was also released by Ryko last year. In addition, Jon spent time in Nashville recently playing guitar and singing on the latest William Shatner record, 'Has Been,' with Ben Folds serving as producer. While all these projects came and went, Jon's ongoing core focus has been on writing, recording and mixing this 15-song solo masterwork 'Songs from the Year of Our Demise,' which he called an 'all-consuming, important-to-me, it's-my-baby type of affair.' With few notable exceptions, every bit of writing, recording, and performing was done by Jon with 'no one else around for miles' as he 'methodically dragged the record into existence.' This deeply personal musical statement stretches far beyond the expected boundaries of an artist known as a power pop legend. The sound will be familiar to any Posies fan who expects exceptional songwriting and hummable melodies, but this unique musical journey also takes listeners to sonic and emotional territories far beyond the expected parameters of the pop genre. Although he has released a solo e.p. in Spain and Japan ('The Perfect Size') and an e.p. of radically reworked covers ('6 ½') on Pattern 25 Records, this is Jon's first solo full-length recording. 'Songs from the Year of Our Demise' truly is the landmark piece of work we all knew Jon had in him.

Here's what you say about
Jon Auer - Songs from the Year of Our Demise.