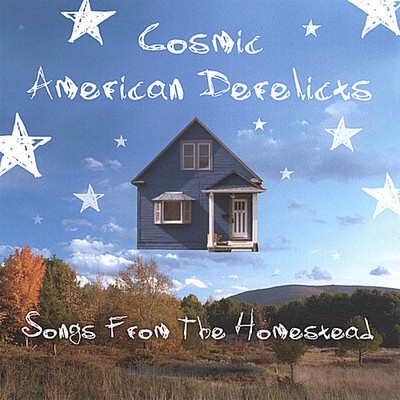 The Cosmic American Derelicts or as their fans call them (the "Derelicts") have been playing throughout the NY/NJ/PA area for over ten years. The band consists of five individuals who revel in what they do. Ed Rainey (35), acoustic/electric/b-bender & lap steel guitars/banjo/ mandolin/dobro & vocals, has been playing since the age of 4 and combines blues with great feel to conjuer up some of the tastiest sounds around. His influences range from bluegrass/country to rock and soul. Founding member George Kapitanellis (36) handles the bass chores (Bass Fiddle/Fender Bass) and some of the writing duties. George got bit by the rock&roll bug in his early teens and has not looked back. Influenced by the blues, psychedelia, roots/Americana and rock and roll, George solidly lays down the line for his partner in crime, drummer Sotiri Karlis. Sotiri (31) (originally was the conga player in the Derelicts but moved over to the drums when original drummer, Galinos Kapitanellis, left the band 98'), has been playing since his early teens. Sotiri's passion and love of rock and roll, and boundless energy supply the Derelicts with that heart pounding beat that gets the crowd shaking. The singing, writing and rhythm guitar is being handled as of late by Scott Lauro. Scotty Lauro (27 years old), was recruited after The Derelicts lost their male/female vocal combination at the end of 2005. Scotty, a long time fan and friend of the Derelicts, came from a local New York band "Little Rusty." Scotty brought a bunch of songs and a lot of youthful energy to this veteran group. He has just started to really sink his teeth into the music and gets better with every gig. In just over 2 years Scott has been gigging and collaborating with The Derelicts on their new CD 'Songs From The Homestead.' All the songs were written by the band except a cover of the late great Townes Van Zandt 'Dollar Bill Blue$.' In the fall of 2007 a great musician and friend Rob Clores (39) joined the band on piano/organ. Rob is featured on 3 of the tracks on the new CD as well as contributing one track to their sophmore CD. Now Rob's on board for the ride. He's a great player with a tremendous amout of feel and soul. . Rob helps to elevate the Derelicts sound and groove to the next cosmic level. We are very happy to have him in our band. Rob has played with some greats: Black Crows, John Popper, Warren Haynes, Patti Smith,etc. The Cosmic American Derelicts have recorded 3 albums. Their self titled debut 'Cosmic American Derelicts' recorded in 2000. Sophmore effort 'The Product'recorded at the legendary Electric Lady studios in NYC 2006 and now they've just finished their third CD 'Songs from the Homestead' 2008. In the spring of 2008 they were asked to back the legendary Terry Reid on his UK tour. Also appearing with the band was Mick Taylor. Cosmic American Derelicts always take pride in their musical heritage and live to play good music. 'We'll give up our guitars when they pry them from our cold dead hands.' The band is currently looking for management, bookings and any other good fortune.

Here's what you say about
Cosmic American Derelicts - Songs from the Homestead.