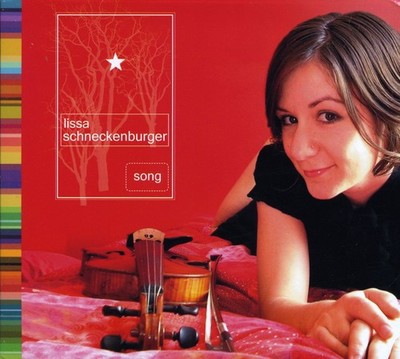 'Schneckenburger's playing is... quietly virtuosic... her voice is pure and clear, full of simple emotion...' All Music Guide The traditional music of New England can be as warm and comforting as a winter fire or as potent and exhilarating as a summer thunderstorm. Fiddler and singer Lissa Schneckenburger is a master of both moods, a winsome, sweet-voiced singer who brings new life to old ballads and a skillful, dynamic fiddler who captures the driving rhythm and carefree joy of dance tunes old and new. Raised in a small town in Maine and now living in Vermont, Lissa grew up with music. She began playing fiddle at the age of six, inspired by her mother's interest in folk music and a family friend who was a professional violinist. Soon she was studying with influential Maine fiddler Greg Boardman and sitting in with the Maine Country Dance Orchestra. By the time she was in high school she was playing concerts on her own, specializing in the sprightly New England dance tunes that combine influences from the British Isles and Quebec with homegrown twists that have been evolving since Colonial days. Another of her major influences was the diverse musical community that she found at fiddle camps, where she had a chance to play with and learn from a wide variety of musicians including noted Scottish fiddler Alasdair Fraser. In 2001 she graduated from the New England Conservatory of Music with a degree in contemporary improvisation, and since then has been performing around the US and internationally for a growing audience of enthusiastic listeners. She has recorded seven CDs, (four solo and three with various groups). Lissa's fiddling is uplifting and lively, and her singing is gentle and evocative. Both in concert and in the studio she is regularly accompanied by some of New England's best musicians, including guitarists Keith Murphy and Matt Heaton and double bassist Corey DiMario. Recently she has been closely studying the roots of the Downeast traditional music that she first heard as a young girl. Her latest project is a pair of CDs dedicated to reintroducing some wonderful but largely forgotten songs and tunes from New England that she uncovered through archival research at the University of Maine and elsewhere. "Song", to be released in April 2008, contains ten timeless ballads that go back as far as the eighteenth century that she set to carefully crafted modern arrangements, while "Dance", scheduled for 2009, will feature fiddle tunes. 'There is currently a lot of focus on traditional American music from the South', she explains, 'and many bands are exploring and recording that repertoire, but no one is getting to hear the amazing repertoire of traditional music from the North. This is my first attempt at getting some of that music out there for people to enjoy.' Whether playing for a folk club audience or a hall full of dancers, Lissa brings to the stage enthusiasm, energy, and the bright future of New England's musical traditions.

Here's what you say about
Lissa Schneckenburger - Song.