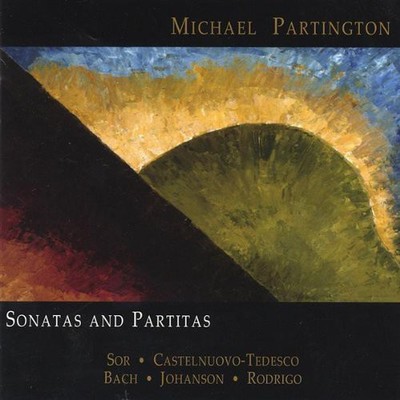 'If you want consummate guitar artistry, try this wonderful new CD by guitarist Michael Partington - performed with such command, tonal variety and musicianship that you'll play this one over and over.' Melinda Bargreen, Seattle Times 'Michael Partington plays on this disc with the kind of visceral excitement associated more with live performance than with recording. This is apparent from the first notes of the first track, Sor's Gran Solo, which gets an absorbingly dramatic interpretation ... The most appealing item on the disc, however, is Bryan Johanson's Partita, a 14 minute listener-friendly work that is nevertheless skillfully put together and which Partington, for whom it was written, clearly has the measure of ... high-voltage performing style ... ' Allen Clive Jones, Classical Guitar Magazine Michael Partington is one of the most engaging of the new generation of concert players. Praised by Classical Guitar Magazine for his 'lyricism, intensity and clear technical command,' this award-winning British guitarist has performed internationally as a soloist and with ensemble to unanimous critical praise. Audiences are put at ease by his charming stage manner and captivated by his musical interpretations. His innate rhythmic understanding and sense for tonal colour combine to form some of the most memorable phrasing to be heard on the guitar. He began playing guitar at age 6 while growing up in Wales, gave his first public performance at age 7 and won his first competition at age 9. He has trained with many of the world's greatest guitarists, including Oscar Ghiglia, Eliot Fisk, Eduardo Fernandez, Manuel Barrueco and David Russell, who commented on his 'exquisite good taste and fluid perfection.' Partington received a performance degree from the University of Washington, where he was a Brechemin scholar and graduated magna cum laude, studying under Steven Novacek. Since moving to the USA he has received awards in several guitar, instrumental and concerto competitions. He has appeared throughout the USA, UK and Scandanavia in solo recital, with orchestra and in chamber ensembles. He has performed along the West Coast from Los Angeles to Vancouver, and in Idaho, Arizona, Texas and Virginia, including the first solo guitar recital in Seattle's Benaroya Hall. Other US performances include the Shenandoah Valley Bach Festival, the Cascadia Festival, the Chelan Bach Fest, the Northwest Guitar Festival and the Portland Guitar Festival, Town Hall and Meany Theater in Seattle, Portland's Lincoln Hall, Murphy Hall in Los Angeles, Katzin Hall in Phoenix. Concerts in England and Wales have included Blackheath Halls, St. Martin-in-the-Fields and St. James', Piccadilly in London; St. Mary in the Castle, Hastings; Bristol Music Club; Norwegian Church, Cardiff; Russell-Cotes Museum, Bournemouth; Brewery Arts Centre, Kendall; Trinity Arts Centre, Tunbridge Wells; Nottingham; Carlisle; Derby; and others. He has performed live on BBC Radio 3's In Tune, BBC Radio Bristol, BBC Wales and Great Western Radio in the UK, as well as on KUOW, KING FM, KZAZ, and KAOS in Washington, KUT in Texas, and cable television in California and Washington. He has also performed with Orchestra Seattle, Seattle Choral Company, Seattle Chamber Players, Seattle Creative Orchestra, Wenatchee Valley Symphony, Seattle New Music Ensemble, Seattle Symphony Chorale, English organist Margaret Phillips, Grammy-winning soprano Carmen Pelton, and the Seattle Guitar Quartet. He has released four solo CDs for Rosewood Recordings.

Here's what you say about
Michael Partington - Sonatas & Partitas.