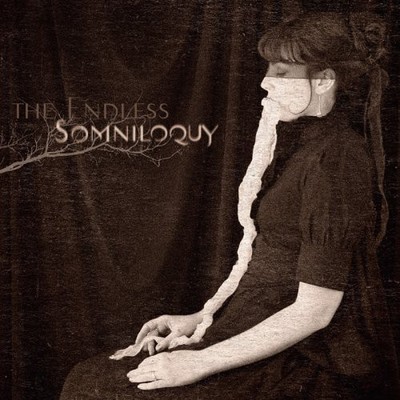 Dreams, ghosts, mediums, and stage magic permeate Somniloquy, the fourth release from husband and wife duo the Endless from Los Feliz, CA. Inspired by 19th century photographs of Spiritualists, séances, ectoplasm, and Bess Houdini, Somniloquy is an album of haunting female vocals and electronic shoegaze and dreampop sensibilities evoking such artists as Goldfrapp, Portishead, and Imogen Heap. The album includes the voices of Endless fans. "We wanted our fans to be more involved in the making of the album," said lead vocalist Adriana Roze. "So we asked them to call a special phone number and share with us their dreams. We were absolutely inspired and amazed by what they gave us." These recorded dreams became the backbone for the album's titular track. Somniloquy brings the first cover song for the band, Neil Young's classic After the Gold Rush. "We wanted to present the song from the point of view of the human race in the 21st century, watching the devastation of the environment and wondering how we missed the warning signs," said David Roze, the band's guitarist, bassist, and engineer. "So there are a lot of harsh, metallic sounds that are juxtaposed with the more organic sounds of strings, straining to make themselves heard in the fray." For the release of the new album, along with making physical CDs available, the band has started a new download store at their website using the model pioneered by Issa (formerly Jane Siberry). "We're very excited about it," said Adriana. "Our entire back catalog is downloadable, re-mastered, and available with a self-determined pricing option. We want our music to be available to everyone and to establish a system of trust with our listeners." The Endless have been featured as Homegrown Artists at Amoeba Music of Hollywood and have made chart-topping sales records at CDBaby. They have played in many music venues around the country and have been featured at the NXNE Music Festival in Toronto. Their previous albums, Grumpy Ghost, ...and i'm the queen of the moon, and the Republic of Heaven have received critical acclaim from publications around the world. Reflecting on their ten years working together, the band is still in love, both with their art and with each other. "As artists and as a couple, we've created a wonderful dynamic of give and take. We've learned balance in our lives and in our art, and it has made the process of creating music together a real gift." Somniloquy is produced by David and Adriana Roze, released by their label Queen of the Moon Music, and mastered by Matt Brown at The Brewery.

Here's what you say about
The Endless - Somniloquy.