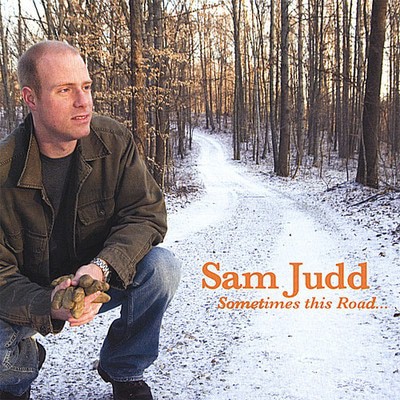 "Sometimes this Road," the debut album from singer-songwriter Sam Judd, explores the many terrains through which the road of life takes us. Themes of faith, love, loss, lament, romance, joy, and hope fill the album. "I think our relationship with Jesus should impact every single area of our lives," says Sam. "That's the theme of this album." Often compared to James Taylor, Chris Rice, and Michael Card, Sam welcomes the comparisons, especially the last one. "I grew up listening to those guys," says Sam, "and Mike's my mentor, so that comparison especially makes me happy." When Sam first realized that he could write and sing, and saw how strongly audiences responded, he did a surprising thing- he didn't seek out a record deal. Instead, he finished college, earning a BA in Bible/Theology with an Emphasis in Pastoral Studies and sought out discipleship with the legendary musical Bible scholar, Michael Card. "I knew that I needed more maturity, both musically and spiritually. My calling in life is to teach the Bible and music just happens to be one of the ways that I am called to do that. Mike's really been instrumental in showing me how live out this call." On the folk/pop, folk/rock, roots oriented travels of "Sometimes this Road," Sam, who plays acoustic guitar, is joined by a community of profound traveling companions. Michael Card and Scott Roley share background vocals, as do Sarah, Hannah, and Leah Peasall ("O, Brother, Where Art Thou?" Soundtrack). Hannah and Leah also lend a hand with mandolin and fiddle respectively, and Michael Card plays a romping piano part on the title track. John Nehlig handles the drums and percussion and Brian Shind delivers on bass. Scott Brasher paints beautifully on "He Cries, "Jesus," with lush orchestration and haunting keys. The song is about Sam's ninety-three year old Grandfather's relationship with the Lord, a relationship that is evident, even in his battle with Alzheimer's. Scott also helps with percussion on "Come Away with Me" a love song that finds inspiration from Sam's other Grandparents. "Would Have Been There," a break up song about forgiveness, is punctuated by Kate Card playing bodhran. Keith Compton (Michael Card, Sara Groves, Jars of Clay, Michael W. Smith) engineered the album and plays percussion and Wurlitzer on a few tracks. The album opens with the simple beauty of "Our Maker," a song about the Gospel. The title track follows, discussing what it means to follow in faith. "To a Fool," a modern take on Proverbs 7, warning of the kind of woman a man should stay away from, is followed by "Would Have Been There." "Light of the Moon" is a lament about how we run from lament, when it is a very necessary part of life. The unique "Girl in the Photograph" is a pro-marriage song, a song that urges men to embrace the real woman in their lives instead of clinging to memories of women from their past, or pornographic images of women. "One Good Woman," a light hearted take on Proverbs 31, is followed by "Come Away with Me" and "He Cries, 'Jesus.'" The album closes out with "Our God, He is Good," a community song of trust and worship. "Sometimes this Road," by Sam Judd, offers an organic reflective experience. Through, beauty, sorrow, and hope, we are shown what it means to walk with Jesus.

Here's what you say about
Sam Judd - Sometimes This Road.