Eisa Davis - Something Else 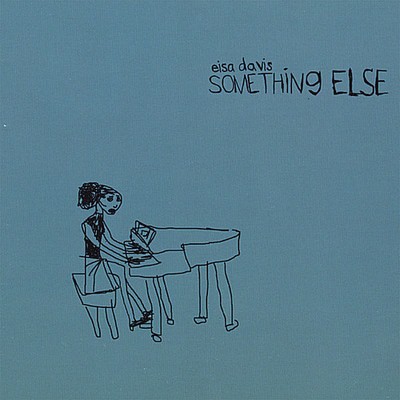 Whenever Nicole Ari Parker's character on the Showtime series Soul Food had a panic attack, you'd hear the voice of Eisa Davis. The two friends met while working on a play together in New York, and years later, Eisa's music was given a recurring role on the series. The viewer response to one song, "Too Early", was so overwhelming that producers tracked the singer-songwriter down in Capri, Italy for an interview. "People were writing in and literally saying how the song came on, stopped them in their tracks, made them sit on the couch, rethink their choices in life and cry," Eisa remembers. "I never knew my music could have that kind of impact." Impact runs in her family: Eisa's aunt is the professor, political activist and icon Angela Davis. Eisa's childhood in the Bay Area was accordingly radical, with Angela tutoring her in Marxism before she went off to college at Harvard. "We've always been very close," Eisa says. "When I was in junior high, Angela used to peg my pants on her sewing machine." But it was her grandmother's insistence on piano lessons and her mother's collection of jazz, soul, and African music that began to shape her life's path. "I would make my sister and my next door neighbor Rainbow do music shows with me after dinner-complete with choreography, skits and magic," Eisa recalls, laughing. "My godbrother would sprinkle baby powder and shine a flashlight through it so it looked like we were in a smoky club." She began writing her own songs on the piano at 13, her style evolving into a stripped down, laidback, acoustic soul that bears the mark of an early eclecticism. Versatility manifests itself throughout her life: Eisa is also an award-winning actress and playwright who was named a finalist for the 2007 Pulitzer Prize in Drama. A member of both the prestigious Actors Studio and playwrights' organization New Dramatists, Eisa has moved easily from roles on film and television shows like The Wire and Law and Order to having her plays presented around the country at theatres including the Hip Hop Theater Festival. Her theatre aesthetic-and sense of narrative-shapes what you hear on her solo debut. "Some of the best theatre I've seen is striking just because of the revelatory communion we can experience through language, through gesture," Eisa states. "And it's the same in music. You don't have to show off. You don't have to have a dozen vocal runs in every word to get someone to pay attention to you. There's a richness that comes just from saying what you feel very simply and very well." Something Else was made on a dare. Eisa was acting in a play at the Sundance Institute when a castmate she'd just played a song for remarked, "I need to have that. You need to have a CD." When Eisa offered that she had an upcoming date at Joe's Pub, she suddenly found herself vowing to have a record ready by the show. With the clock ticking, Eisa rounded up collaborators she'd worked with many times before-graphic artist Douglas Kearney, percussionist Daniel Sadownick (who'd played tours with Me'Shell N'degeocello and Angie Stone), and guitarist Marvin Sewell (known for his own band as well as his work with Cassandra Wilson, Lizz Wright, and Jason Moran). In a Brooklyn studio she adored for it's vibe, engineers, and hundred year-old Steinway grand piano, the album came together in just two weeks. Eisa chose songs she'd been singing live for some time, ones that had settled into themselves and would be second nature. "I Weep", a tortured ballad drenched with acidic regret, contained lines from a Rumi poem translated by Coleman Barks. The quiet reflection that leads to triumph in "Something Else" had begun as a guitar motif that Daniel T. Denver, the other half of Eisa's Tinctures project, once played for her. "Perfect" and "40 Moons" were on her very first demo, and their sunny chord progressions had kept them fresh. The euphoric lyrics of "Push Me Over" made it a live favorite, "Come On" was originally written in one hour for performance in a benefit auction, and she'd sung "I See My Beauty In You" as a wedding gift for a friend. The sessions took place on her days off from rehearsing the rock musical Passing Strange at the Public Theater. Additional recording and mixing were crammed into early mornings, and engineer Jonathan Townes presented Eisa with the master CD after an all-night session that ended on her birthday, May 5th. With all of the amazing musicians and artists who helped her make the record, Eisa had kept her word, and sold her first CDs at her gig at Joe's Pub, the audience and stage filled with family and friends, old and new. On Something Else, you'll hear a hint of Joni Mitchell, Fiona Apple, maybe even Gershwin. You might think you're hearing the soundtrack to a one woman musical or feeling the breeze at a Paris café. South African jazz pianist Abdullah Ibrahim might take some credit for Eisa's unabashed simplicity, and one glimpse of the flagstone sidewalks in her Brooklyn neighborhood reveals all the joy and heartbreak emanating from these ten songs. "Once upon a time, it wasn't so unusual to cross disciplines," Eisa explains. "No division of labor. You sang, you acted, you wrote-but there weren't eight thousand names for you, you were just a poet. I'm like that-multifaceted." Which makes her all the more rare a jewel.

Here's what you say about
Eisa Davis - Something Else.