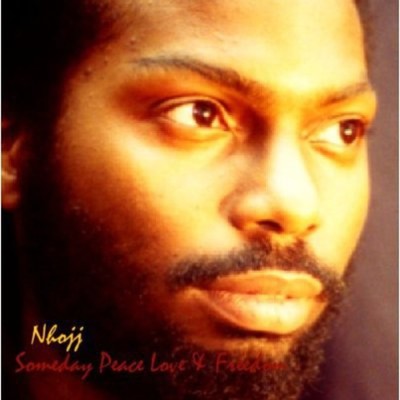 Guitars strumming... soft and smooth... 2 voices singing in harmony "I laid in my bed last night..." He closes his eyes and allows himself to reminisce -feels like a lifetime"...staring up to the sky..." He grew up in Guyana, the son of an Adventist minister, and had started singing at the age of 5, in a small church not far from the ocean. He remembers that first performance and how nervous he was. Now, 25 years later, he is listening to his second CD "Someday Peace Love & Freedom." The music is mellow like Sade and cuts across musical boundaries mixing reggae, soul, and poetry. The Caribbean influences remind him of this poor socialist country on the tip of South America. Before he left, he had performed on local radio programs, in churches, and finally at the stadium in front of the President and thousands of others. But Church is where it all started "Hold on... everything will be alright..." maybe that is where he got his sense of hope. Funky guitars kick off the 2nd track, and his clear falsetto whispers "Cut the strings... untie the things... that keep you down... bound... facing ground... lost now found..." Then the heavy bass line... Trinidad was the land of heavy driving bass lines, carnival, calypso, soca, sand, sun and again the ocean. This was high school, fun, friends, laughter, and then a burgeoning need for more. He hadn't stopped singing and once again, this time as a member of a quartet, he found himself singing for the President of this country and a stadium full of listeners. The sounds of instrumental bullets echoing in the distance brings him back to the present "... how long would it take for you to call for peace?" For Nhojj peace was music. After graduating from NYU with honors and a BA in Economics, he decided to spend a year teaching himself to record and produce. He then spent another 2 years producing what Musicdish.com would call "musical genius" his debut "I've Been Waiting for You". Nhojj spent the next 2 1/2 years performing in churches and clubs around NYC. He made his acting debut at the 2002 International Fringe Festival in the award winning play "The making of the Black Man", co-produced the "The Underground to Peace and Unity" concert in support peace, and released a live performance DVD "An Intimate Evening with Nhojj" with Emmy nominated director Bill Cote. Yes recording and performing had brought him his peace - his freedom. Lying here in the sunshine brought a sense of accomplishment, he's been enjoying this new CD. Where his debut had been like a personal diary -deep, personal, melancholic, and poetic, "Someday Peace Love & Freedom" is relaxed, calm with lots of vibes and grooves and social commentary. It is hopeful. A slow reggae groove that morphs into "The Beggar's Cup" begins. This song tells the story of a beggar at a street corner, but he isn't begging for money - he's begging for something far more important, something that will last... He is begging for love. Nhojj stops the CD, it has been a long journey. And in many ways he has just begun - life is a well of possibilities, both frightening and exciting, and he has certainly had his share of both. But in the end, the experiences have been rewarding, he'd managed to discover his truth, express it, and share it with those that came along his path.

Here's what you say about
Nhojj - Someday Peace Love & Freedom.