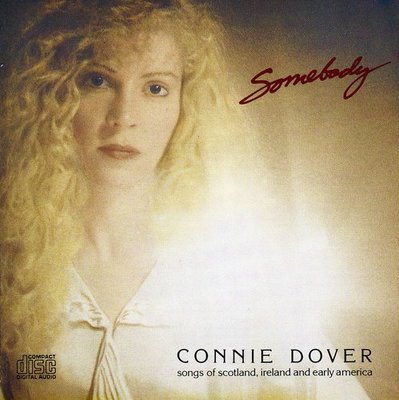 About Connie Dover 'Just occasionally, a voice arrives on the folk scene that is so pure, so beautiful, so magical, that it tells you: this is how to sing a song. Such a voice has Connie Dover.' - The Scotsman (Scotland's National Newspaper) Acclaimed by the Boston Globe as 'the finest folk ballad singer America has produced since Joan Baez,' Connie Dover is a singer, poet and Emmy Award-winning producer and composer. Her soaring, crystal-clear voice and inspired arrangements of traditional music of Scotland, Ireland and the American West display a depth and breadth of range that have earned her a rightful place among the world's finest traditional singers. Connie began her Celtic music career as a lead singer for the Kansas City-based Irish band, Scartaglen. She has toured extensively, performing on radio, television, and in concert throughout North and South America. Her broadcast performances include guest appearances on NPR's Weekend Edition, A Prairie Home Companion, Thistle and Shamrock, Mountain Stage and E-Town. Connie's solo CDs: Somebody, The Wishing Well, If Ever I Return and The Border of Heaven, have firmly established her reputation as a world-class vocalist, garnering rave reviews. Produced by Scottish music legend Phil Cunningham, her recordings feature instrumentation by some of Scotland, Ireland and America's finest traditional musicians. She recently collaborated with The Kansas City Chamber Orchestra on a CD of traditional Christmas songs and carols, entitled 'The Holly and the Ivy', which will be released in 2008. Connie's work as a writer and composer has flourished alongside her performance career. She received a 2007 Emmy Award for her production of acoustic music for the KCPT public television production 'Bad Blood - The Border War that Triggered the Civil War'. Her original music earned a Grand Prize in the 2007 Yellowstone-Teton Song Contest, sponsored by The Western Folklife Center (Elko, Nevada), and she is a recipient of the Speakeasy Prize in Poetry, sponsored by the Loft, America's largest independent literary center. Her book of poems, 'Winter Count', was published in 2007 by Unholy Day Press. Connie has twice been a finalist for the AFIM Indie Award, and other accolades for her music include being named a Top Ten Folk Release by Tower Records Pulse! Magazine, a Winning Favourite Folk Release by The Scotsman, Scotland's National Newspaper, a Boston Globe Top Ten Folk Release, a nomination for Scotland's Living Tradition Award Album of the Year,and a Creative Achievement Award from Time Warner's Hollywood On-Line. She has been a finalist for two Native American Music Awards, and for two New Age Voice Music Awards for Best Vocalist and Best Celtic Release. Connie founded the Taylor Park Music record label to release her music, which is now distributed worldwide, and she has contributed songs to compilations on the Narada, Sony, Virgin, EMI, and Rounder record labels. She has been a guest on numerous collections of folk and world music, and on film and television soundtracks, including the PBS programs 'Last Stand of the Tallgrass Prairie' and 'Water and Fire: A Story of the Ozarks' (which won two Emmy awards for music), and she was a music consultant for the Ang Lee Civil War film epic, 'Ride with the Devil'. Born in Arkansas and raised in Missouri, Connie Dover is of English, Cherokee, Mexican and Scots/Irish descent. She discovered the wealth of the Celtic music tradition as a teenager, and began a search which continues to this day, devoting her life to the collection, preservation and performance of traditional songs and ballads. Her history degree, earned from William Jewell College, and her undergraduate work at Oxford University have further enriched her unique perspective of the cultural context of folk music, and her insightful interpretations bring ancient ballads to life. Her classes and workshops exploring the creative core of writing and performance are a hallmark of her work. When Connie is not performing, she works as a ranch cook in the beautiful country between Wyoming's Wind River and Absaroka Mountains (and where she can often be heard singing old-time songs around a roaring campfire to the accompaniment of hoarse cowboys and lowing cattle). The theme which runs through her work is the exploration of the common ground between British Isles and American folk music, and she offers the modern listener a musical experience that transcends cultural boundaries and affirms our connection with the past. A warm and engaging performer, and a singer and composer of the highest order, Connie Dover's diverse background and interests are reflected in the depth and richness of her approach to traditional music. 'Connie Dover has become an American treasure who has rediscovered the musical synergy that existed between the British Isles and the American West.' - Cowboys and Indians Magazine 'Her soprano is shimmeringly pure, her phrasing pristine, her evocations of ancient Anglo-Scottish, Irish and American cowboy ballads melodically exquisite and utterly believable.' - Scott Alarick, Boston Globe 'Connie Dover possesses that most rare of instruments, a voice so evocative,so perfect, that it makes other great voices pale. Hers is a universal voice, following the thread of history,so steeped in tradition it conjures images of Scotland, of Ireland, of Appalachia, of the Old American West . . . a consummate singer of Celtic music.' - Old West Journal 'Some singers, though singing in a foreign language, have very moving voices. Even if the audience does not understand the words, it will be attracted by pure feelings that are expressed naturally . . . so Connie's singing, like a crystal spring,drives away our fatigue and brings vitality to our lives.' - Chinese Press (Singapore)

Here's what you say about
Connie Dover - Somebody.