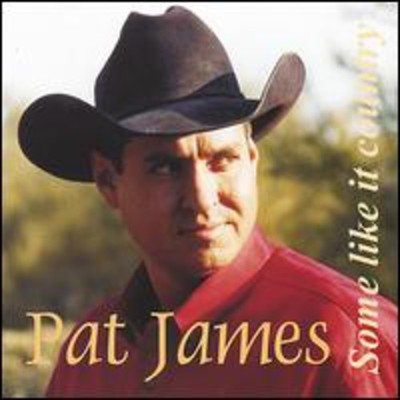 Pat James, long known as one of Arizona's finest country music artist released in 2001 his debut CD. The CD, 'Some Like Country' features 14 traditional country songs of which Pat wrote 11. Pat's unique style is heavily influenced by the likes of Marty Robbins, Gene Watson, Merle Haggard, Hank Williams Sr. and Eddy Arnold. 'Some Like it Country' is a return to the tradition of America's great country music. It features a sound that takes one back to the time when country and western music was about the music and not the money. With Pat James, there won't be fancy light shows, smoke and loud guitars, but only the true, pure sound of country and western music the way it was and the way it should be. Pat employed the best in area musicians as well as a couple of hired guns from out of town. 'Some Like it Country' has been produced by Pat James, engineered by Otto D'Agnolo and recorded at Chaton Studio in Phoenix. Here is what Otto has to say about it: ....'In a day when high tech wizardry has nearly replaced the need for talent in the creative process it's refreshing to find a singer / songwriter like Pat James. With Pat, we tracked the old fashion way. We used real live musicians all playing together at the same time and Pat actually sang the songs without the artificial processing equipment that many of today's top country singers use to get on pitch. He's the real deal and when you hear him live, he'll sound just like the record!' - Otto D'Agnolo, Emmy award winning producer /engineer /writer (Credits include: Glen Campbell, Kenny Rogers, Waylon Jennings...) '...Just listened to it and it is absolutely awesome!!!! One of the best CDs I've heard in a long time. All great tracks....real country....and some terrific songs from Pat James' pen. Congratulations on a truly great CD....it's one of those that I could just put on the air and let it play right on thru. I love it! Pat has some marvelous vocal cords!...' August 2007 - Tom Wardle - WDVR FM '...Involuntary reaction: Yeehaw! Wow, Pat James has got the old school country sound down to - what it is - an art form. I love the fiddle and the honky tonk piano. This is like hearing good old Hank Williams...' October 2006 - Consensus Music Reviews. '...I've finally found a young country singer from outside of my home state of Texas that is a HOSS ! I can now excitedly add Pat James to taday's list of shufflemasters...Pat is right up there with them in vocal ability and musical selection. It's like finding a treasure you didn't know existed...' February 2006 - Country Shufflemania '...While on Pat's site, I clicked on a song clip, 'When I See Her Again' (I liked the title). I heard the first 3 notes he sang and that was all it took... I was in love with 'the voice'! Now that I've heard both of his CDs, over and over, I love his style, his timbre, his vocal range, and how he stays true to traditional country music. I love the way he 'feels' a song rather than just sing it... that cry in his voice that can only come from the heart... The reality of life and love blended with each note... Man!... I just love to hear this man!...' October 2005 - My Kind Of Country Pat James has been voted one of the Top 25 artists of 2006 by the editors of Indie-Music Magazine.

Here's what you say about
Pat James - Some Like It Country.