Collide - Some Kind of Strange 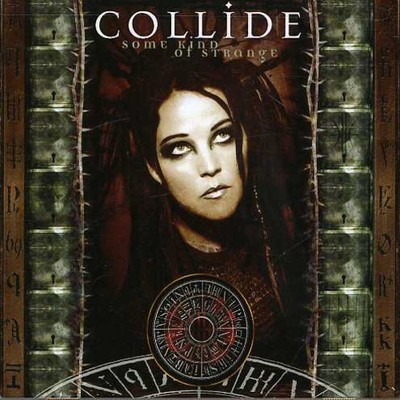 The essence of Collide is the coming together of two opposing entities to form a symbiotic whole. Noiseplus Music is thrilled to present 'Some Kind of Strange', the fourth album by Collide. Collide is about letting the sound orchestration unfold and develop into it's own identity. This is probably why we hear so often that our music really does not sound like anything else. We are not your traditional type of musicians. We don't really play music, we try to create soundscapes--layers of depth and emotion that dig into different levels of the psyche. Statik and I are complete clashing opposites that try to meet at the same place, combining the female and masculine energies, the cognitive and the subliminal, the strength and the mystery. 'Some Kind of Strange' is once again named after the lyrics of the central track. The themes of the lyrics center around one's place in the universe, and also one's place within ourselves. They confront the thought that we create our own type of illusions and control our own paths in life. Each decision we make will somehow affect the outcome, as we sit on the outside and the inside of the human shell as both passenger and spectator. 'To me everything in life is strange and it's what you make of it.' 'Art was always my escape in life', says kaRIN. 'It was the one thing that was safe, because I was in control, and it was the way to ultimately release my deepest emotions. In music, I feel truly blessed to be allowed this form of expression, and to be able to reach out to other people's emotions, as well as my own innermost levels. It allows me to speak directly to the core, and unleash feelings from the most primal, to the most cerebral, and inbetween.' Statik: ' I suppose I have always been driven to make music that I want to hear. If I am working for other people, I just try to help bring their songs to another level, while adding my own sound. With Collide, it seems more difficult because we make all the decisions, and there's a whole canvas to paint, and before a song is finished, the picture can change a dozen times.' No strangers to the music industry, Statik has worked with the likes of Tool, Powerman 5000, and Prince. He is also currently involved in the re-formation of Skinny Puppy. KaRIN has contributed vocals to Frontline Assembly and Plateau (cEvin Key's side project). As in the past, several of guest musicians contribute to the music of Collide. This CD includes the talents of cEvin Key of Skinny Puppy as well as Danny Carey from Tool. Once again this album is a self release. 'We see so many things in the music industry that are not in the artists favor, where it becomes all about business. It is our vision to help make that change, while making music that we believe in, and to set a path for ourselves, as well as other artists.

Here's what you say about
Collide - Some Kind of Strange.