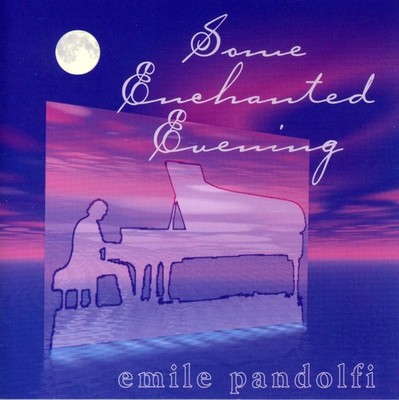 About Emile It has been said that he plays "luxurious arrangements" with an "ethereal quality"; that he plays in a "free-flowing, emotional manner that seems to go to the music's very soul." (Stereophile Magazine) Without a doubt, when you hear Emile Pandolfi play, you know that you are hearing one of today's finest pianists. Receiving his degree in piano performance, Emile applies his classical technique to Broadway and Popular music, in addition to classical performance, to the delight of his many fans. Strong in both technique and musicality, he has performed in many parts of the world throughout his professional career. Best known for his arrangements, Emile's favorite music to arrange comes from Broadway musicals. "In addition to being melodically fulfilling, these songs usually contain meaningful lyrics and lend themselves to interesting arrangement". In many of his arrangements, one can hear the influence of Chopin and Debussy, accounting for the sensitivity and passion with which he plays. Recording since 1991, his lush arrangements of familiar music have sold over two and a quarter million copies nationally. This has earned Emile the distinction of being the top-selling artist in the alternative music industry, distributed primarily in specialty, gift and book shops across the nation. While he was growing up, the Pandolfi home was known as "the place to gather" and music was always associated with fun. That attitude continues today in Emile's live performances. And, although serious about his playing, Emile is never serious about himself. While the audience is treated to a brilliant musical performance, they are also entertained by Emile's charming sense of humor and friendly personality. Whether you experience Emile Pandolfi on recording or in live performance, you will experience the intensity and skill of communication that can only come from a true artist, in every sense of the word. And you just may find yourself inspired along the way! A poet of popular music, November 1, 2005 Emile Pandolfi plays show tunes, movie music, and the Great American Song Book, like no one else. He even includes the occasional classical selection, which is inevitable, as he is a classically trained artist in the traditional sense. Pandolfi's dexterity at the keyboard is highly polished; yet one hardly notices. One does notice his gorgeous tone, which seemingly knows no depth; his pianissimo playing, which I can tell you, reaches all the way to the back of the hall; his massive fortissimos, which always leave the impression that he has more to give; his melting legato touch, which makes the piano sound like anything but a percussive instrument; and his seemingly limitless imagination. Once you've heard Pandolfi's presentation of a song, it will be difficult for you to imagine it any other way. Partly, this results from his own imagination: he is able to listen to music and lyrics with such freshness, even to the punctuation of lyrics, that he understands what many of us pass over. Then, he brings the resources of his technique, his sound-all his musical training and experience-to bear on the story in his mind. But not just the story: the character of the story, the atmosphere of the story. The result is nothing short of a recreation of each song Emile Pandolfi plays, and that result is often very powerful. John Pendley About the Artist Critics call Emile Pandolfi's music 'luxurious arrangements with an ethereal quality;' that he plays in a 'free-flowing, emotional manner that seems to go to the music's very soul.' (Stereophile Magazine) While keeping the melody uppermost, this solo pianist applies his classical technique to Broadway and Popular Music alike, all in addition to his classical performance. This unique mixture of passion and elegance has resulted in making him one of the top selling artists in the alternative market. Classically trained since the age of five, Pandolfi took a road-less-traveled by most serious artists and created his own inspiring arrangements of Popular Music. He began recording them in 1991, and has accumulated a catalog of 25 different albums and compilations. Without a doubt, when you hear the music of Emile Pandolfi, you will experience the heart and soul of one of todays finest pianists. John Pendley.

Here's what you say about
Emile Pandolfi - Some Enchanted Evening.