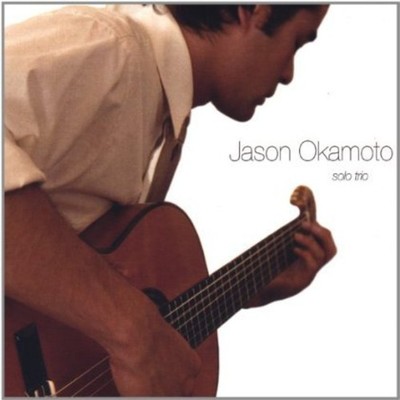 Jason Okamoto is a guitarist based in Portland, Oregon. This CD, Solo Trio, is his debut recording under his own name. Originally conceived as a live trio recording of Django Reinhardt inspired jazz, the album's direction quickly changed as Jason began to put down arrangement ideas at his home studio. After recording a few songs by himself, over-dubbing both guitars and bass, he decided to move forward with the 'solo trio' concept. With an early 1950's Selmer-style acoustic guitar, and an old Kay upright bass, his sound always remains firmly rooted in the Gypsy jazz tradition. 'Solo Trio, by Jason Okamoto, is the guitarist's debut CD with Mr. Okamoto handling all of the instrumental duties. A sideman in the ever growing 'Gypsy Jazz' scene, the Portland based guitarist has recorded an album of swing classics, a few latin standards, and even several original compositions using period piece acoustic instruments. Although it is clearly inspired by Django Reinhardt, the CD doesn't simply mimic the great gypsy guitarist. His 'trio' consists of lead guitar, rhythm guitars, and acoustic bass which consistently achieves a light, but swinging groove.' -NWJazzProfile Magazine (Dec 07)- some recent concerts: Djangofest NW Gypsy Jazz Festival- 2004, 2005, and 2007 Jazzfest Northwest- 2005,2006 Musicfest NW- 2003, 2004 SXSW Music Fest- 1999 NXNW Music Fest- 1999 Folklife Festival- 2003, 2004, 2007.

Here's what you say about
Jason Okamoto - Solo Trio.