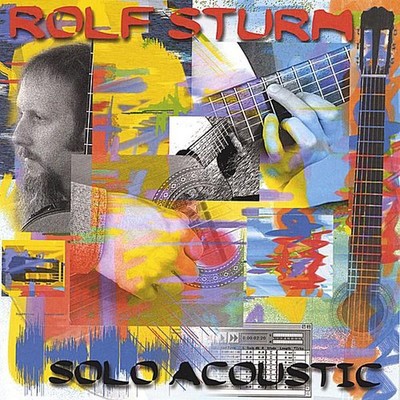 Rolf Sturm is a NJ area guitarist who has performed and/or toured with banjo pioneer Tony Trischka, Blue Note drummer Billy Martin, the Grateful Dead big band Illuminati, country singer Eddy Arnold, the Argentinean tango group New York-Buenos Aires Connection, klezmer clarinetist Giora Feidman, and the Walter Thompson Orchestra. He leads his own New York City area bands Feed The Meter and Just Cause. He co-leads the trio Tricycle and he was the featured guitarist in Night Music for John Lennon under the baton of it's composer, Lukas Foss. Rolf has toured North America and Europe, performing at the World Expo 2000 in Hannover, Germany, and at Lincoln Center and Town Hall in New York City. He has performed on soundtracks for both film and television and has released numerous CD's on the Water Street Music label. Rolf has also recorded dozens of CDs as a sideman, appearing on recordings with Glen Velez, Maggie Roche, Dave Douglas, Cameron Brown, Jorma Kaukonen, David Johansen, and Buddy Cage. Rolf has studied with John Abercrombie, Jim Hall, Bill Frisell, and Joe Pass. PRESS QUOTES (from various recordings and performances) '...unparalleled guitar-driven music.' '...reaches further than probably anything you've heard from six strings prior to now.' CADENCE MAGAZINE '...music that is sublimely sensitive, while still maintaining an undercurrent of mystery with an improvisational edge...' 'A truly expressive guitarist...' BILL MILKOWSKI (writer Downbeat & Jazziz) 'This is a creative and special collection of short stories.' BASS WORLD '...guitarist Rolf Sturm...pushed around the harmony and made everything gel. In doing so, he works toward the greater good and creates his voice.' MUSICIAN MAGAZINE 'I have never heard a piece of music cross into so many boundaries and deprecate every established parameter.' '...words are incapable of expressing the art.' JAMBANDS.COM '...skilled...musical...eclectic...unique...guitarist Rolf Sturm' BACKSTAGE SHOW GUIDE 'Where no guitar has gone before... Rolf Sturm' THE BERGEN RECORD.

Here's what you say about
Rolf Sturm - Solo Acoustic.