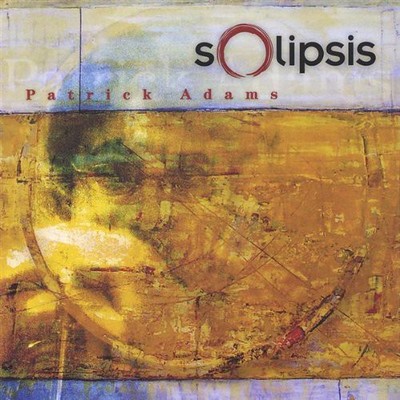 Notes on Solipsis: I have been primarily occupied for the past twenty years or so as a visual artist. My paintings, which could be described as abstract landscapes, are a good metaphor of my parallel interest in musical composition. Both my paintings and musical compositions are the result of a very intuitive and improvisational process of give-and-take. At a certain point in this process, an idea begins to assert itself which is then embellished and refined. Neither the paintings nor the musical compositions, however, are without structure. Just as the paintings derive from the landscsape, so the songs are structured in a traditional jazz format. My various experiments and experiences over the years with many musical genres and instruments have, at the very least, provided a lot of grist for my artistic mill. And since I felt that I needed the time and the freedom to sort through my ideas at my own pace, I thought it important to play the various instruments myself. The intended result was simplicity. As I have been wandering this musical landscape trying to find my voice, it seems that I have come to precisely where I would have wanted to be-had I known where I was going at the beginning. Perhaps 'all who wander are not lost.' Biographical Information for Patrick Adams: Patrick Adams was born in the small, southwestern Minnesota farming community of Worthington in 1965. This rural setting of tall-grass prarie and natural lakes would make a lasting impression. When he was twelve, he began entering local and regional art competitions and selling his paintings. In 1983, he entered Bemidji State University in northern Minnesota with scholarships in both art and music (trumpet performance). He later transferred to Winona State University in southeastern Minnesota where he received the Mausycki Art Scholarship (now the Max Weber scholarship) and was awarded a solo exhibition. In 1988, Patrick married Dr. Terre Wilson in Rochester, Minnesota where Terre was completing her residency in Internal Medicine at the Mayo Clinic. They moved to Lexington, Kentucky in 1989 for Patrick to enter the Master of Fine Arts program at the University of Kentucky. In his second year, he was awarded a full scholarship and began working as a teaching assistant. After graduating in 1992, Adams continued to teach at the University of Kentucky and in 1994 began teaching at Asbury College. Patrick and his family moved to Nicholasville, Kentucky in 1998 where he built a studio near his home. In 2000, he was awarded an Al Smith Fellowship which enabled him to spend a month in Provence, France where he laid the groundwork for his abstract landscapes. He left his teaching responsibilities in 2001 to pursue his art full-time. Adams is represented by Mary Bell Galleries in Chicago, Illinois, Ann Tower Gallery in Lexington, Kentucky, Chapman Friedman Gallery in Louisville, Kentucky, and Gallery One in Nashville, Tennesee where he is scheduled for a solo exhibition in August, 2005. Patrick has also continued his interest in music both as a performer and composer. In 1987, he released an album of original solo piano pieces titled Piano Sketches. He performs regularly in jazz combos, big bands, and rock venues. His latest recording project of original jazz compositions, Solipsis, was released in early June of 2005.

Here's what you say about
Patrick Adams - Solipsis.