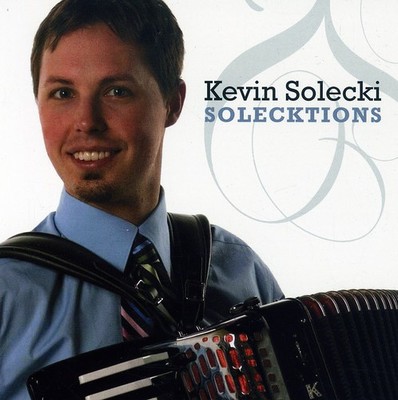 Kevin Solecki: ACCORDION Kevin was born and raised in Warren, Michigan, in October 1978. Kevin started taking accordion lessons at the age of 6, studying at Eligio's Music Studio of Warren (currently EDB Studios), under the instruction of store owner Eligio DiBerardo. He then went on to study classical music for 10 years, before getting involved in polka music. At the early age of 10, Kevin started playing solo accordion performances. He could be found playing at nursing and senior homes, weddings, anniversaries, church functions, restaurants, and private parties. Some of Solecki's earlier highlights included a performance on Detroit's WCAR Radio in July 1989, a television appearance on Detroit's WXYZ TV in March 1991, and an interview with his hometown newspaper, The Warren Weekly, in February 1992. Kevin stopped taking accordion lessons at the age of 16. Shortly afterwards, while still maintaining a demanding solo schedule, he joined a nationally known polka band from Pennsylvania, the 'Polka Family'. After several extensive months of traveling the country with the Polka Family, Kevin decided to relocate to Pittsburgh, Pennsylvania in February 1997, where he currently resides. Over the past 11 years, Kevin has performed all over the United States, including trips to Alaska, California, Florida, Hawaii, and Las Vegas. He has toured internationally in Canada, Mexico, Bermuda, the Caribbean, and Europe. He has also done numerous radio and television shows, and had the opportunity to perform at some of the country's top polka festivals, state fairs, county fairs, hotels, and cruise ships. Some of Solecki's career highlights include a PBS Television documentary on the "polka", recorded with the Polka Family in October 2001. This documentary, called 'Polka Passion', aired nationwide in the spring of 2002, during PBS's pledge drive season. He was then asked by Pittsburgh's local PBS affiliate, WQED TV, to compliment the documentary with a solo interview and a performance on his accordion. Another career highlight includes a GRAMMY nomination for his debut album 'Solecktions'. His visit to the 48th Annual GRAMMY Awards Ceremony held in Los Angeles, California in February 2006 was a memorable experience. Most recently, Kevin was invited to perform at the 7th Annual International Accordion Convention in Las Vegas, Nevada in June 2006, the Root River Center as part of the Milwaukee Accordion Club's 15th Anniversary Concert Series in July 2006, and Mario Tacca/Mary Mancini's International Accordion Spectacular Show in October 2006. You can currently hear some of Kevin's accordion playing on 5 Polka Family albums... Family Favorites Vol. I, II, III, I Love Polka Music, and West Coast, with featured solos on Family Favorites Vol. I, II, and West Coast. He can also be heard on several other polka recordings, including 'All Tuned Up' (1998) by The New Tradition, 'Going To A Dance' (1999) by John Stevens' DoubleShot, 'Back To Polkas' (2004) by Stephen Kaminski & The Dream Team, 'The Best of Polka Parade' (2004) & 'The Best of Polka Parade (2005). Outside the polka field, Solecki can be heard on a country album 'Don't Look Back' (2005) by the PovertyNeck Hillbillies. In 2005 Kevin decided to branch out and do his own project. He chose a few friends to help him achieve a full band sound by accompanying him on drums, bass, guitar and accordion, and they recorded and released 'Solecktions' in June 2005...a polka album consisting of different styles of polka/waltz music. It was nominated for a Grammy Award for 'Best Polka Album' during the 2005-2006 season. His most recent recording is a project called "Solecktive Sounds" which was released in September 2007. It once again features different styles of polkas/waltzes. It also features 14 talented guest musicians performing on drums, bass, guitar, banjo, violin, vocals, trumpet, saxophone, clarinet, flute, accordion, concertina and piano. After 10+ years performing and traveling with the Polka Family, Kevin has departed from the band. He may still be seen filling in with various polka bands around the country. When he can't be found performing at one of the nations top polka festivals, you may catch him performing a solo show between Pittsburgh, Toledo, Detroit, and Las Vegas. These performances still include senior communities, church functions, country clubs, corporate functions, restaurants, private parties and solo concerts.

Here's what you say about
Kevin Solecki - Solecktions.