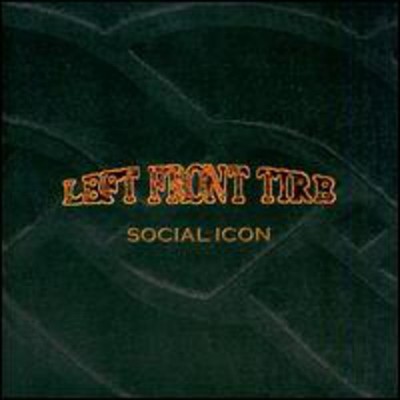 Formed in 1992 in Cornelia, Georgia (a small community in the north Georgia mountains) when the band members were barely in their teens, Left Front Tire spent it's early days of playing school gigs locally around Habersham County. Citing influences ranging from Guns 'n' Roses to Rancid and declar-ing a fondness for 'old country like Hank Sr. and Merle,' the band released an eponymous DIY album in '96. 'We did that and graduated from high school; we thought we'd be famous in '97. It never went like that,' says drummer Josh Davis. The band followed in 2000 with Social Icon, a blistering album filled with dead-on harmonies and infectious pop hooks delivered with an attitude. Along with 10 original tracks, Left Front Tire acknowledged the full range of their musical influences - not to mention their roots - with a cover of Hank Williams Jr.'s 'A Country Boy Can Survive.' Social Icon, produced by Rick Beato (Mike Lee, King Konga) and released on the band's own Gladiator Records, sold over 5,000 copies. Earning a rep as a high-energy live band, Left Front Tire not only grabbed the attention of punk-pop fans throughout the Southeast club circuit but also in the music industry. This reputation - and their ability to back it up - led to performances in front of huge crowds at Atlanta alternative rock station 99X's 'Big Day Out' and Music Midtown (Atlanta, GA's largest outdoor festival). In 2001, Left Front Tire's song 'Bring You Down' was added as the third track on the American Pie 2 soundtrack just behind Blink 182 and Green Day and before the likes of Uncle Kracker, American Hi-Fi and Alien Ant Farm. In late 2001, 99X added the single to their rotation. Now, after a decade spent honing their sound, recording and playing live dates, stacking up an impressive resume along the way, Left Front Tire is poised to release it's first album with The Redeye Label, 42 Ways to Lose a Friend. The album's title came about through a conversation the band had in their tour van during one outing. 'It was one of those 'on the road' conversations,' recalls drummer Josh Davis. 'We actually counted up the girls we had known that more than one of us had dated; first it was 10, then when we got to 42 we were like, 'Ohmigod, this is so embarrassing,'' he says, laughing. 'The reason we selected that for the name of record is that it reflects our lives in between the last record and this record - growing up, becoming a man, and the terrible things we did to each other. Somehow, we all got through it, 'cause we're all best friends in the world.' Frontman Chip Dillard couldn't agree more. 'We went in a little foggy but we hacked through it, and it was just like, 'Wow, we finally did it,'' he says, talking about making the album. 'I am more proud of this record than anything we've done yet; we put a lot of blood, sweat and tears type stuff in it. It's what we meant to convey - in a good way.' Left Front Tire's music is the sound of combustible youth, the impending chaos of punk rock, the sing-along melody of pop and the wisdom of per-formers experienced beyond their years. In short, it's damn good and it's about time you heard what you've been missing up until now. The band's third CD, 42 Ways to Lose a Friend, hits the streets July 15, 2003! LEFT FRONT TIRE FACTS... Left Front Tire has: * appeared on the American Pie 2 soundtrack (one of the top ten grossing movies of 2001) * sold 5000+ copies of the independent release Social Icon * had the #1 selling CD at Athensmusic.net for 2002 (an online retail store for all Athens, GA music) * the single 'Bring You Down' was added at 99X (one of the country's top modern rock stations) * just toured the UK (Dates in Scotland, England & Wales) (Sept 2002) * headlined a Warped Tour date in Atlanta, performed during Atlanta's inaugural On the Bricks concert series. performed at Music Midtown for two straight years' performed at Atlanta's Big Day Out for two straight years, performed at 99X's Downtown Rocks concert series (summer 2002) * supported tour dates for American HiFi, SR-71 & Butch Walker * wrote & recorded soundtrack songs for New Line Cinema LEFT FRONT TIRE is... CHIP DILLARD [vocals, guitars] JUSTIN HOLCOMB [vocals, guitars] JOSH DAVIS [drums, vocals] BRENT REEMS [bass]

Here's what you say about
Left Front Tire - Social Icon.