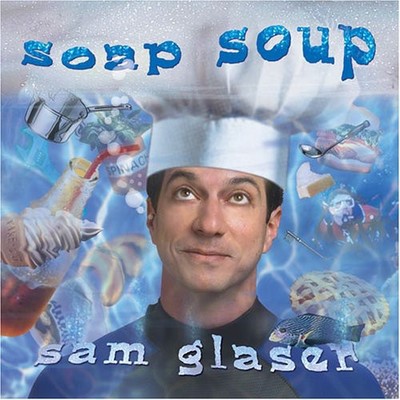 Soap Soup is a creative concoction of music and mayhem for kool kids and their fantastic families...twenty upbeat new songs performed with enthusiasm and joy by Sam Glaser, his amazing band and a kids choir. Following a decade of touring in the Jewish music world, Sam has turned his attention to music that makes kids rock, with themes that celebrate the joy of childhood. Although Soap Soup is not a religious CD, it carries with it a love of life and a reinforcement of positive values, with a bit of mischief on the side. Sam Glaser's soulful music has become part of the fabric of Jewish life in communities worldwide. There is no one on the circuit performing as frequently as he is to audiences of all colors of the Jewish spectrum. Over 100,000 people of all ages experience his spirited concerts each season, in such venues as The Greek Theater, Universal Ampitheater and Dodger Stadium, from Sydney to London to Hong Kong and Tel Aviv. Considered one of the top ten Jewish artists in the U.S. by Moment Magazine, his annual fifty city tours culminate each year with summertime concerts throughout Israel, making him a unique ambassador for the Israeli cause throughout the diaspora. He is equally comfortable behind a grand piano in intimate solo concerts, leading his top-notch eight-piece band or headlining with full orchestra. Sam's collection of over a dozen impeccably produced Jewish CDs of his inspired compositions are among the bestselling in the Jewish world and can be heard in Orthodox, Conservative and Reform synagogues, schools, libraries, camps and carpools. Each album reflects a different facet of Jewish life and highlights a unique period in his spiritual journey. Among the many Glaser Musicworks releases are his latest offerings Presence and The Edge of Light, The Bridge, the award-winning children's musical Kol Bamidbar, as well as Across the River, A Day in the Life and his debut album Hineni. Sam received a BS in Business and Music from the University of Colorado, as well as having attended Berkelee College of Music and the UCLA Film Scoring Program. He has served as Executive Director of the Jewish Music Commission, Music Coordinator for the University of Judaism, Producer of the American Jewish Song Festival and Musical Director of the Brandeis-Bardin Institute. In his cutting-edge recording studio, Glaser Musicworks, Sam scores for film, television and radio and produces albums for a wide variety of recording artists. Sam has served as a cantorial soloist in synagogues worldwide and is a teacher of classes on Jewish topics, including the popular weekly workshop Seasons of Joy which he teaches every Monday Night in Los Angeles. He is active in the Coalition for Advancement of Jewish Education, is a fellow of the Center for Jewish Culture and Creativity and was a Jewish Big Brother for seven years. Sam lives in the Pico-Robertson neighborhood of Los Angeles with his wife Shira and children Max, Jesse and Sarah.

Here's what you say about
Sam Glaser - Soap Soup.