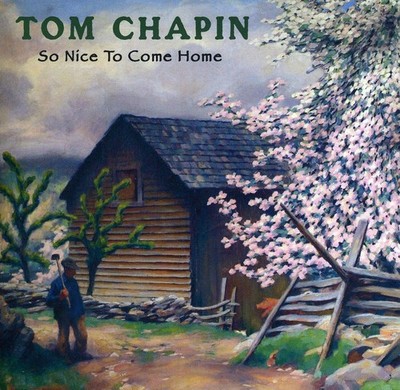 TOM CHAPIN 'Comes Home' So Nice To Come Home, the long-awaited, much anticipated album by Tom Chapin is finally here, filled with music that touches and connects. One of America's 'most beloved folk singers," a pioneer in children's music, and a legendary live performer, Tom Chapin has long been one of our finest singer-songwriters. So Nice To Come Home showcases his strengths: great songs, easy powerful singing, strong arrangements and a blending of styles that Tom makes uniquely his own. All twelve original songs relate in some way to Chapin's thoughts of home. Among the many highlights are four songs written with the celebrated songwriter and activist Si Kahn. The album opens with the hypnotic rhythms of The Singing Man, a poetic journey connecting the power of song and the human spirit from the beginning of time to the present, and closes with Pass The Music On, a stunning folk anthem that honors the songs and musicians who first kindled Tom's interest in this kind of music. The other two Chapin/Kahn songs are intensely personal: Coming & Going, a song Tom sings to his wife as they deal with the conflicts of home and the road; and the country flavored Always Gone, a song sung to his father that begins where Tom's late brother Harry's classic Cat's In The Cradle ends. On the lighter side is the New Orleans flavored Lucky & Lucinda, written with Tom's longtime collaborator John Forster, and the bizarre saga of The Battle Beast & Barbie, for which Michael Mark contributes his wild imagination and sense of the absurd in this love song about two highly unlikely partners. This song has become a "cult hit" at Tom's live performances. The team of Mark & Chapin also penned the moving Memories of Christmas, a new classic holiday song and, along with brother Stephen Chapin, Hunger & Thirst, a powerful and passionate indictment of hunger in America. Ranging from bluesy When You Let Your Baby Down to the stark balladry of Ellis Island, from the gentle resignation of One & One Make One to the punchy guitar rag of the title track, this beautifully produced recording represents the finest of modern folk music. "Warm spirit, infectious humor, and sensitive satiric songs... one of the great personalities in contemporary folk music." ...The New York Times "Hearing a quiet singer such as Chapin sing a quiet romantic song is still one of the serene pleasures of pop music." ...People Magazine "Tom Chapin has an easy, appealing way with songs about emotional connection, grassroots protest and personal commitment." ...Rolling Stone Hey, Chapin! What do these songs mean to you? The Singing Man: A mother with child in tow came up to me after a concert and said, "She calls you 'The Singing Man'." It has stayed with me. I feel like it is an Indian name, a power name, a name that denotes a responsibility. I brought that thought and story with me when I went to Charlotte, NC to write with Si Kahn. Always Gone: I went through stages with my Dad. He was the best. He was the worst. Now he's living in between. Like me. Lucky & Lucinda: This song started as an attitude. When You Let Your Baby Down: This song started as a guitar lick with an attitude. One & One Makes One: Falling in love is a leap of faith. It's taking a leap and letting go. The Battle Beast & Barbie: My daughters played with their Barbie Dolls. I had a dream, what would happen if Barbie fell in love with the worst metal mutant in the universe? I had a verse and brought it to Michael Mark, who was crazy enough to help. Coming & Going: This is a song for all of us who must travel to make a living...the traveling salesmen and women, the truckers, the airline people, the musicians. This is for all the road warriors. And for all the ones left behind. Ellis Island: We are all newcomers. We are all immigrants. We come from a foreign shore. And all of our families have stories like this one. So Nice To Come Home: The word "home" has a strong resonance for me. This image seemed like the one that all the songs on this album connect with home in a personal, musical, historical, emotional and political way. Hunger & Thirst: One of the great tragedies of hunger in America is that we are beginning to get used to it, as if this was normal. My brother Steve wrote this chorus. It's so simple and clear that it's almost transparent - so obvious that it must be said. Michael and I used it as a jumping off point for the rest of the song. Memories Of Christmas: Come December and my thoughts of home are strong and clear. Pass The Music On: I am not traditional, but I come from a tradition. Pete Seeger, The Weavers, Woody Guthrie, Burl Ives, Bob Gibson, Erik Darling, Rev. Gary Davis, Big Bill Broonzy, Little Richard, The Tarriers, Bob Dylan, Paul Simon, The Beatles, and on and on.

Here's what you say about
Tom Chapin - So Nice to Come Home.