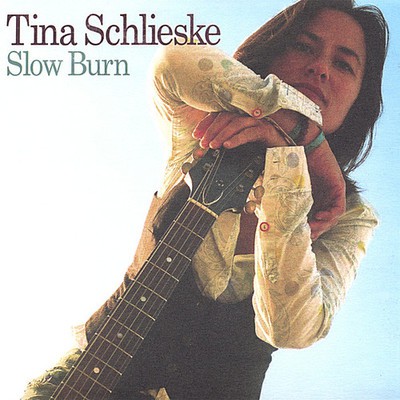 Tina Schlieske was born in Chicago and raised in the music hub of Minneapolis, Minnesota. Her mother - herself the daughter of a Russian Opera diva, adored music and passed her passion along to her children. Tina was weaned on 70's FM radio and the music her Mother blasted from her stereo. Joni Mitchell, Janis Joplin, the Beatles, and Elvis were all early inspirations. But then an Aretha Franklin tape her sister Laura gave to her sealed Tina's musical fate. She had her first guitar at 13, and her first electric guitar at 16 and taught herself out of the chord books she found in her sister's piano bench. As a teenager with an independent streak, Tina formed a band, Tina & the B-Sides, a rock/soul/blues concoction that went on to become one of the most popular bands in the Midwest. Starting her own independent label Movement Records along with an aggressive touring schedule of back-to-back two hour plus shows and an onstage energy that ignited the crowds earned Tina a reputation that was hard to ignore. Seymour Stein from Sire records went to see a Tina and the B-Sides show at the famed CBGB's in New York and she was signed the next day. Tina stayed with the label for 4 years and recorded 2 albums with Sire, Salvation (produced by Paul Fox) and It's All Just the Same (produced by John Fields). They had songs in three major motion pictures, 'The Traveler', 'A Simple Plan' and 'Very Bad Things' as well as major TV commercials such as Motorola. Tina and band shared stages with acts like Lenny Kravitz, Susan Tedeschi, the Indigo Girls, The Wallflowers and Etta James. Moreover, Tina had collaborated with such diverse artists as Stewart Copeland, Me'Shell Ndegeocello and Minneapolis native Dan Wilson. During that time, she was also considered to play the role of Janis Jolpin in Paramount Picture's 'Piece of My Heart' a film about the late singer's life. After 12 years of fronting her band the B-Sides, releasing 8 records, selling nearly 100,000 CD's (mostly from word of mouth) and touring for an epic decade-and-a-half in front of throngs of passionately loyal fans, Tina wanted a change. One of the changes was a decision to leave Sire and go back to the band's grassroots once again. To celebrate their new independence, Tina and the B-Sides played two nights at Minneapolis' First Ave to sell out crowds and recorded the event. The result was their 1999 double live CD, The Last Polka, which became the band's swansong. Tina moved West after the band's breakup and for all of 2000 she toured the country solo with just her and her acoustic guitar, playing the small clubs that had been so supportive during the B-Sides' reign. Additionally, she formed a cover band to pay homage to her early inspirations, Lola and the Red Hots. Lola released two CD's including the unendingly popular Christmas album, 'Have Yourself A Red Little Christmas' She also began exploring new and different outlets for her talents. In 2001, Stevie Ray Vaughn's band Double Trouble approached Tina offering her the lead singer/rhythm guitarist slot. Throughout that spring and summer Tina stunned hard-nosed blues-rock fans and critics alike with her gritty voice and passionate performances. Tina decided not to stay on permanently with DT, and returned home to write new material for her solo debut, something she had been putting off doing for too long. SLOW BURN WAS RELEASED OCT 2005.

Here's what you say about
Tina Schlieske - Slow Burn.