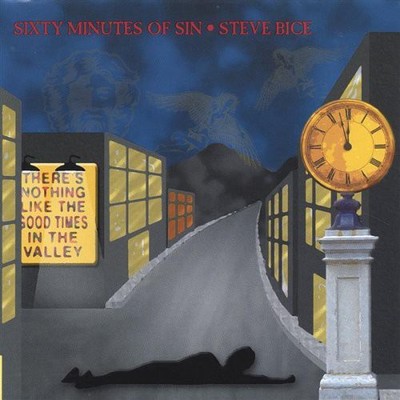 'Steve Bice uses my favorite Nashville Songwriting Taboos (drinkin', cheatin', dyin') to remind us what REAL country music sounds like. It's a hell of a day when you have to describe real country music as 'insurgent'. That day has come. Introducing Steve Bice'. Joe X. Horn, KSYM Third Coast Music Network, 1997 That quote from Mr. Horn perfectly sums up Bice's songs. You'll find no candy-coated stories of sanitized lives like those popularized by Nashville's castrated cowboys and prom-date ho's. Bice's songs have been described as 'too real'. He writes hard-core traditional honky tonkers and dark, tragic, folk tales influenced by his musical heros Emmylou Harris, Johnny Cash, and Waylon and Willie. There's no phony posturing about how 'country' he is, either. He's an inner-city guy born in Niagara Falls, N.Y. and now living in Farmington, Mi. Spurred on by a suggestion from Michigan rocker Mark Hiser, lead man for Most Wanted, Bice tried his hand at songwriting. When he completed a group of songs that defined his idiosyncratic 'emotional extremes' style, he contacted Al Perkins, pedal steel-dobro virtuoso and one of the original Flying Burrito Brothers. Under Al's expert direction, what was originally intended to be a set of demos became the first CD, 'The Sin Citizen Sessions'. The enthusiastic reception and resulting worldwide exposure convinced Bice that there was an audience for his unique songs. That response combined with promoter Dave Brogren's idea of utilizing Tom Russell's long-time collaborators, Andrew Hardin and Fats Kaplin, gave Steve the impetus to complete a new song cycle. Their outstanding musicianship perfectly complement his songs on the new CD, 'Sixty Minutes of Sin'. 'Once upon a time country music reflected the emotions and life experiences of mature people. Whether it was love or heartache, disappointment, loss, or facing death, there was a partner-in-spirit in the lyrics of a country song. Here's a complete lyrical study of failed lives and uncertain futures, songs of depression, obsession, desolation, and desperation. Fifty-two minutes of music and Sixty Minutes of Sin'.

Here's what you say about
Steve Bice - Sixty Minutes of Sin.