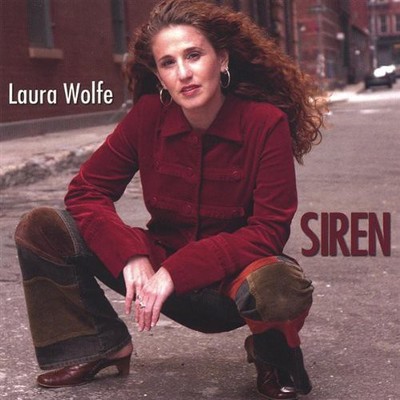 'In the finals for NPR's "All Songs Considered", and supported by College Radio Airplay on over 200 stations and 4 continents, Laura Wolfe is a true urban singer songwriter. Her hit song, City Child from her DIY debut SIREN, produced with GRAMMY Award® winner Steve Addabbo (Shawn Colvin, Suzanne Vega) won an honorable mention in the 2006 and 2007 Billboard World Songwriting Contest. She was selected to participate in ASCAP's 2006 extended songwriter's workshop in NYC, and will be playing Boston Pride in 2007. A native of New York City's Lower East Side, Laura comes from a family of musicians and lefty activists who influenced her passion for music at an early age. "I grew up listening to everything from Jimmy Cliff to Brahms. The sounds and vibe of my neighborhood are all over my music. The Lower East Side was rough in the day-gangs, drugs, burnt-out buildings and radical revolutionaries. A bit different from the chic boutiques you see now. But it was also this amazing melting pot of culture, music, and philosophy." Laura's debut SIREN reflects the many musical and cultural influences that have shaped her as an artist. "As an over all style I would call it soulful" (Steve Addabbo). Laura left New York City to earn a BA in Original Performance from Oberlin College. During college Laura was selected to perform her songs at The Fringe Festival in Edinburgh, Scotland, and went on to tour Europe with the Broadway road production of Hair. Laura has been making a name for herself playing all the key venues in New York City such as Joe's Pub, The Knitting Factory, The Cutting Room, The Bitter End, CB's 313 Gallery and Cornelia Street Cafe. Regionally, she has played The House of Blues in Boston, Fire and Water Café in Northampton, MA, and Café Du Nord in San Francisco, CA. She has performed at Carnegie Hall and The Tribeca Performing Arts Center, as a soloist with the Lavender Light Gospel Choir. The Dawn and You & Me (singles) were released on the compilation CDs Out Music (produced by Digital Force) and The Voice Box (produced by One Nation Underground). Laura has two prior recordings: Little Pieces, a collection of live recordings, and Laura Wolfe, a four-song demo. SIREN is Laura Wolfe's debut full-length album.

Here's what you say about
Laura Wolfe - Siren.