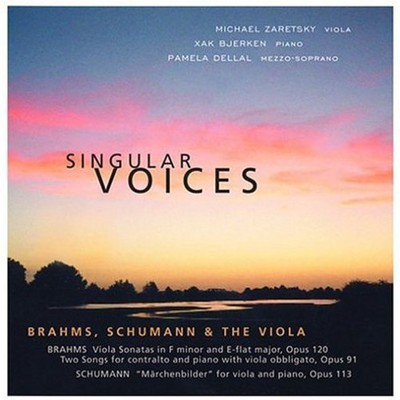 Michael Zaretsky Born in the former Soviet Union, Michael Zaretsky graduated from Moscow State Conservatory cum laude. He began his career as a member of the Moscow Philharmonic String Quartet and later of the Moscow Radio and TV Symphony Orchestra. In 1972 he immigrated to Israel and became principal violist of the Jerusalem Broadcasting Symphony Orchestra and a soloist of Radio Israel. The following year, he played for Leonard Bernstein who brought him to Tanglewood, where he successfully auditioned for the Boston Symphony Orchestra. Besides being a member of the BSO for the past thirty-two years, Mr. Zaretsky regularly plays solo recitals and chamber music in the U.S., having appeared with some of the leading artists of our time, including Yuri Bashmet, Yefim Bronfman, Emanuel Ax and Vadim Repin. In addition, he has soloed with the Boston Pops, the Rhode Island Philharmonic and Atlantic Symphony Orchestra. A faculty member at Boston University and the Longy School of Music, Mr. Zaretsky regularly performs in Israel, Japan, and Mexico. In addition to the traditional viola repertoire, Michael Zaretsky performs an extensive repertoire of new music. His collaboration with composer Jakov Jakoulov has resulted in many works for viola with piano, with harpsichord, and with orchestra. In July 2003, Mr. Zaretsky was soloist with the Tanglewood Music Center Orchestra in a performance of Jakoulov's Viola Concerto No. 2, a work written for him. Also in summer 2003, he appeared as soloist with the Georgian Chamber Orchestra at the International Music Festival directed by Liana Issakadze in Borjomi, Republic of Georgia. He has made three highly acclaimed recordings for the ARTONA label; the first, Black Snow, an album of Russian music for viola and piano with pianist Xak Bjerken, was included in Fanfare magazine's 1999 'Want List.' Bach, Bach & Bach, with harpsichordist Marina Minkin, was released in September 1999, and Singular Voices: Brahms, Schumann, and the Viola, also with Mr. Bjerken along with mezzo-soprano Pamela Delall, was released in the fall of 2000. In December 2004 the label released Mr. Zaretsky's viola performances of J.S. Bach's Six Cello Suites, recorded in Symphony Hall.

Here's what you say about
Michael Zaretsky - Singular Voices Brahms Schumann & the Viola.