Colleen Crosson - Singing Into Being 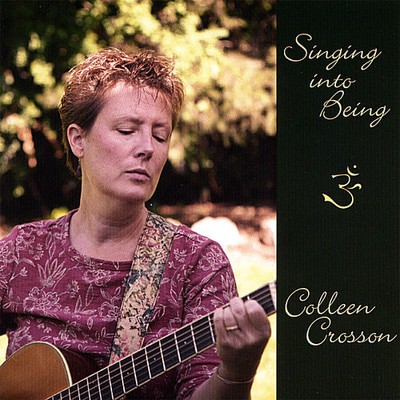 'Just beautiful... Deep and true and real and easy and altogether delicious" .... 'Colleen is one of those naturally gifted singers who gets inside a song and makes it her own'.... These are the ways in which others have described Colleen's clear, pure vocal sound and captivating performances. Vocalist/guitarist Colleen Crosson has been performing in Colorado and surrounding areas for over 28 years. Her musical styles are diverse, ranging from new acoustic/contemporary folk to jazz, country, gospel, bluegrass, and rhythm and blues/rock. She has performed with numerous groups over the years, including the country band Rounder, the R & B/rock band Hot to Go, the a cappella group, Our Mothers' Daughters, (who released a CD, 'Carry On' in 2001), and the Bob Hollister Band, with whom she recorded 3 CDs (most recently in 2003), and won 2nd and 4th place in the Telluride Bluegrass Festival Band Contest (1993 and 1994). She currently performs solo (vocals and acoustic guitar), as well as with her husband, keyboardist Mark Sloniker, The Unitics, and Swing Essence. With her various groups, she has opened for David Wilcox, John Prine, Jonathan Edwards, and Cheryl Wheeler, and has performed solo with Tom Kimmel, Carrie Newcomer, Cliff Eberhardt, Justin Roth, and Catie Curtis. Colleen has performed with the Fort Collins, CO Symphony Orchestra and also sings regularly with Wisconsin performing songwriter Johnsmith when he is touring in CO. Colleen's harmony vocals can be heard on several other artists' recordings, including Barbara Clark's 'She Won't Wait', Kevin Jones' 'Journey' and 'The Collection', Rabbi Jack Gabriel's 'Eagle Wings' and 'Living Tree', Taos recording artist John Daly's 'A Piece of My Life', and Gregory Long's 'Padma Thunder'. In recent years, Colleen has realized her passion for sharing her musical gifts in spiritual, as well as secular, settings. She served as Director of Music Ministry for the Whole Life Church of Religious Science in Fort Collins, CO from January 1994 to March 2001, and is currently Co-Director of Music at Unity of Fort Collins, with husband Mark Sloniker. As part of her music ministry, she has been invited to perform in churches across the country, including Mile Hi Church of Religious Science in Denver, Unity of Salt Lake City, Utah, the Anchorage Church of Religious Science in Anchorage, Alaska, and the Whole Life Church in Lake Oswego, Oregon. In 2001, she helped lead morning services for 600 chaplains of various faiths at the Association of Professional Chaplains National Conference in Denver, CO. She has provided music for the Dances of Universal Peace. Colleen is dedicated to the spirit of service in her life, and continues to donate her time and musical gifts to many local organizations, including Fort Collins United Way, Schools for Chiapas, Hospice of Larimer County, Project Self Sufficiency, the Rocky Mountain Raptor Program, Alternatives to Violence, The Women's Center, Habitat for Humanity, KRFC Community Public Radio, The Peace Alliance, and other environmental, social, and political causes.

Here's what you say about
Colleen Crosson - Singing Into Being.