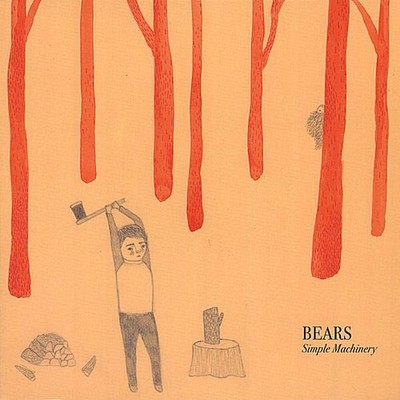 Simple Machinery, the 2008 sophomore album from Bears, finds the band more confident and focused in their songwriting and style. From the bouncing bass on 'Wait and See,' to the Farfisa organ-driven 'Please Don't,' the album is all solid gold hits. It's the perfect album for riding in the car with the windows down on a summer day. Simple Machinery will be self-released digitally and on CD, and Pink Teeth Records (Via Audio, The Dead Science) will issue the vinyl pressing. One of Alternative Press' '100 Bands to Watch in 2008,' Bears recently released a well-received 7' on the Brooklyn label IMPOSE Records featuring the live favorite 'Who Knows' on the A-side. 2007 saw interesting things happening for Bears' music, as they received great press from SPIN Magazine, and the song 'How To Live' was featured on a compilation CD from Urban Outfitters Stores & Filter Magazine, along with Radiohead, Tegan & Sara, Sea Wolf, The Weakerthans and a bunch more. The guys also took their show on the road, where they expand to a six-piece on stage. Several tours have taken the band to New York City, Austin, San Francisco, Seattle, Chicago and everywhere in between. Charlie McArthur and Craig Ramsey began recording as Bears in the summer of 2005. Their first album happened, almost by accident, in about eight months. This self-titled album was self-released in April 2006, and the band soon received praise from publications like Skyscraper, Alternative Press, Amplifier, and Impose Magazine, among many others. The record also received considerable college radio play, hitting #94 on the CMJ Top 200 in August of the same year. The pair continued to write music as winter began in Ohio, and the songs took on a slightly darker tone. The aptly-titled 'Shortest Day of the Year' EP was released at the end of winter, and, once again, great reviews rolled in from places like The Big Takeover, 30 Music and Urban Pollution. The EP also hit #95 on the CMJ Top 200 after receiving a good deal of airplay.

Here's what you say about
The Bears - Simple Machinery.