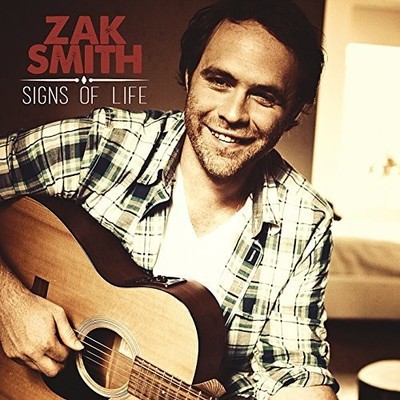 For Zak Smith, a song is never truly finished. He may have written, recorded, and released it on an album. He may have played it countless times at venues up and down the East Coast. His fans may even count it among their favorites. But a song-a good song, a sturdy and solid song, the kind you live with your entire life-is a living thing, constantly revealing new meanings and new possibilities with every performance. That idea fueled the New Jersey native's new album, Signs of Life, which is arguably his most personal and certainly his most accomplished to date. A prolific songwriter for fifteen years, Smith has amassed an extensive catalog of tunes, many of which appear on his studio albums and many more exist only in demo form in his archives. For this project, he re-recorded ten songs from various stages of his career, updating them to reflect new technical abilities and new musical concerns. In doing so, the arrangements changed fundamentally, as Smith took what had been full-band rock songs, full of spiritually inquisitive lyrics and heart-on-sleeve drama, and stripped them down to their barest bones: guitar, piano, and his own finely grained voice. As a child in Montclair, New Jersey, Smith was a voracious reader who dreamed of becoming a writer (an early short story took second place in a statewide competition). It wasn't until high school that he became equally voracious as a listener, thanks to a friend who introduced him to Bowie and Zeppelin, Hendrix and Lennon. Using his father's old tablature books, Smith taught himself to play guitar and honed his ever-developing voice. This would guide Smith in his career as a professional musician, which began modestly when the eighteen-year-old college freshman played a coffeehouse open-mic night. Since that debut, Smith has played countless shows in venues of all sizes, written a full catalog of songs, and has recorded five albums and one EP. In 2013, he released The Precambrian Age, which at the time represented a creative and commercial peak: He won Best Male Vocalist at the Jersey Acoustic Music Awards and was featured in the book Are You Listening? The Top 100 Albums of 2000-2010 from New Jersey Artists. Signs of Life is his most powerful statement yet-an album that is simultaneously lush and austere, spontaneous yet deliberate, largely acoustic but with an electric charge to every note. These heartfelt, often brutally honest songs sound just as lively and urgent in 2014 as they ever have.

Here's what you say about
Zak Smith - Signs of Life.