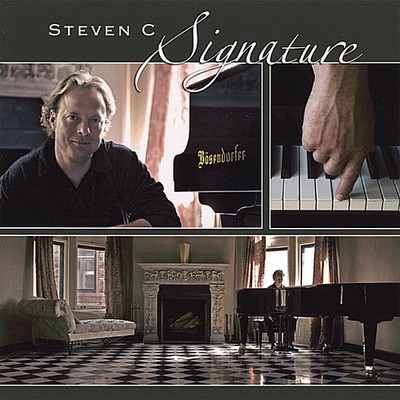 Celebrated composer and pianist extraordinaire Steven C (a.k.a. Steven C Anderson.) fills his busy life with the gift of music. Through his artistry and passion he delivers his heartfelt music in a way that is both enjoyable and accessible to an ever-growing fan base. Steven's talent has been enjoyed worldwide, via numerous recordings, live performances and has graced the airwaves of NBC's The Today Show, QVC, PBS, Oprah, Music Choice, and the Discovery Channel. As an established and respected recording artist, Steven Anderson has impressively sold well over 2 million records throughout his beloved canon of music, which includes the popular CD Chasing Grace (American Gramaphone) and a best selling series of natured themed CD's with the acclaimed NorthSound Label. His "Heart Strings" recording project, recorded in London at famed Abbey Road Studios, (the "A" room) features all original compositions, and boasts the contributions of Grammy Award™ winning conductor Arnie Roth (Andrea Bocelli, Charlotte Church, Warner Bros., Records, Walt Disney Records) and the prestigious London Symphony Strings. This remarkable recording has been heralded as his best and most musically realized to date, and has elicited great response and interest throughout the music industry. Classically trained and gifted with a keen ear and sensibility for all styles of music, Steven began his musical education with perfunctory piano lessons at home that many burgeoning artist endure-eventually perfecting his craft and distinctive style at respected Hamline University. It is at Hamline where he earned a BA in music and had the good fortune of studying extensively with the late jazz legend Manfredo Fest (Concord Jazz). Additionally, his alma mater recently honored Steven's ever-expanding musical excellence by presenting him with the distinguished First Decade Award. Beyond being an esteemed performing artist, which has included performing with Mannheim Steamroller, Steven also lends his in-demand musical talents to a select list of diverse and respected client such as the Minnesota Timberwolves, Fitsgerald Theater and as producer for the award winning "Baby Genius" series. In the early 90s, Steven became audio director/executive producer for NorthWord Press-the successful Wisconsin-based record label that produced albums mixing music with the serene sounds of nature. Steven has produced over 400 successful titles for NorthWord Press and other noteworthy labels. Additionally, Steven proudly, along with other venerable musicians as Tori Amos and Victor Borge, endorses the illustrious Bosendorfer piano. (His '9 centers his home and recording studio and gets a vigorous workout daily) Steven is also proud to be associated with the Spare Key Foundation- a non-profit organization offering financial assistance to parents with critically ill children. Steven has produced a benefit CD entitled "Opus Derian," in honor of Derian Keech; a 2-year-old Twin Cities boy who died of a rare disease referred to as CHARGE syndrome. Steven's signature song for this special project "Opus Derian", was highlighted on the Oprah television show. Steven enjoys living, fixing, recording and domesticating in his old house on historic Summit Ave. In St. Paul. The New Recording Projects: "Heart Strings" and "Signature" Whether you are aware of it or not, somewhere along the line you have heard Steven Anderson's music. If you don't yet know him by name, that is about to change. Simply put, Steven Anderson paints pictures with sound. He is a true artist of the highest caliber, who possesses a uncanny ability to affect change in people and open their heart through his inspiring music. Two million plus buying listeners will attest to that. What is this special gift he possesses? The truth lies in his music-hearing is indeed believing. Steven's composing skills and keyboard magic has never been more evident, than on this newest "Heart Strings" recording. Steven fulfilled a life long dream of recording in London's historic Abbey Road studio. Sitting where the Beatles and other greats had been before him was an amazing experience. Teaming with Grammy Award™ winning arranger/conductor Arnie Roth and the prestigious London Symphony Strings, Steven's new compositions have been captured in all their brilliance. Steven brings his unique creative melodic sense and pop sensibility in all it's glory to this special new recording. Sonorous, lush and accessible-he blends the best of contemporary song structure with a classically influenced touch and feel that is cinematic in scope and sound. The grandeur of this remarkable recording is due in part to a return to old-fashioned recording techniques capturing Steven with the London Symphony Orchestra Strings as a live acoustic ensemble. This process was complemented by recording in analog, which ultimately delivered a smooth warm sound, rarely found in today's music For Steven's "Signature" solo piano project, it was time for his 9-foot Bosendorfer to be the star. This amazing instrument now located in an truly inspiration space at 340 Summit avenue in Saint Paul. Just like a "Signature" this unique collection represents the best of Steven C.'s trademark style and sound.

Here's what you say about
Steven C - Signature.