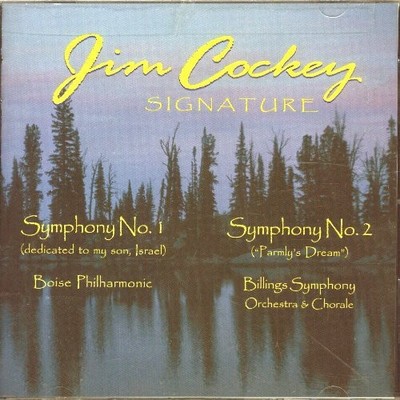 PROGRAM NOTES Symphony No. 1 is dedicated to my son, Israel. It was Israel who suggested that my symphony be about 'play' and 'love.' I was both appreciative and awestruck by this simple yet profound suggestion particularly since Israel is autistic and has severe difficulty with language. The middle movements of my symphony are indeed entitled 'Play' and 'Love' and the two outer movements serve to border the inner movements and to deal with the emotional context surrounding a special needs child. The first movement perhaps deals with my emotions arising from the enigma of it all, and the final movement is perhaps aimed more at Israel and his struggle and his ability to achieve joy and success against overwhelming odds. Symphony No. 2 ('Parmly's Dream') is a series of tableaus from the life of Parmly Billings. Parmly was the eldest son of Frederick and Julia Billings. Frederick Billings was the president of the Northern Pacific Railroad and is the namesake of Billings, Montana. Frederick and the Billings family lived in Woodstock, Vermont. Parmly lived in Billings, Montana for approximately four years in the mid-1880's. He died in Chicago on his way home, aged 25. As site specific as that sounds (i.e. only folks in Billings Montana would be interested in this piece), the Second Symphony actually has more universality than one would expect. What we have here is a simple tale of father and son and of a family tragedy. There is something in the telling that seems to affect everyone. I didn't realize this would be the case until the piece was performed and recorded. The father and son aspet, by the way, is the element that ties the two works together. Again, I didn't notice this until after I had decided to put both works on a single disk. Funny how often it works out like that. Both recordings are live recordings of the premiers. Symphony No. 1 is for orchestra. Symphony No. 2 is for orchestra, choir and 5 soloists (three vocalists representing Parmly Billings and his parents Frederick and Julia, solo piano, and Native American flute, drum and vocals. The native American music was collaboratively written with Joseph Fire Crow [see bios below]) BIOS JIM COCKEY Composer- in-Residence Jim Cockey was born in Baltimore, Maryland, but has spent most of his life in Idaho. He holds a composition degree from the University of Oregon where he studied with Homer Keller and Hal Owen. He has received numerous grants, commissions and honors, including a gold album for his work with members of the Moody Blues, and the Idaho Governor's Award for Excellence in the Arts. Recent commissions include works for the Langroise Trio, the Darkwood Consort, and the Continental Harmony project with the Carson City Symphony. Other commissions include the Boise Philharmonic, Bill Quist, Keith Young, and Bunting Dance. Future projects include String Games - a work for the Cassatt Quartet and the Opera Idaho Children's Chorus based on stories from the Nez Perce tradition, and a violin concerto for Geoffrey Trabichoff. JOSEPH FIRE CROW Native American Musician Born in Montana and raised on the Northern Cheyenne Res ervation until he was nine years old, Joseph Fire Crow is a respected fluteman who was frequently called upon to perform at various community events, and shares music and tribal history through lectures and workshops which include lessons in flute making. In April of 1996, his self-titled release, Fire Crow, was one of the first recordings to be launched nationally on the Makoche label, and is one of the label's best sellers. Fire Crow's follow-up album, Cheyenne Nation is a soulful mixture of traditional flute and contemporary instrumentation promoting the unity of the Cheyenne people. This release received a GRAMMY nomination in the 'Best Native American Music Album' category at the 43rd Annual GRAMMY Awards. Ken Bums also included some of Fire Crow's music on the soundtrack for his documentary 'Lewis and Clark: The Journey of the Corps of Discovery.' Fire Crow now makes his home in Winsted Connecticut.

Here's what you say about
Jim Cockey - Signature.