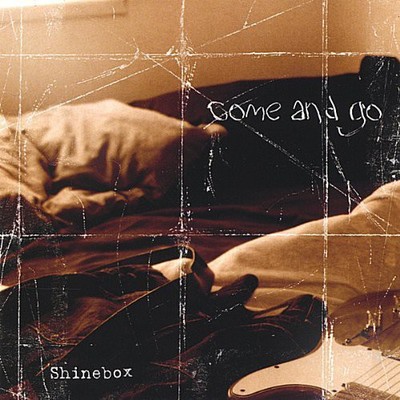 Bands live and die by their hits, and hits live and die by their hooks. And as you'll hear when you drop Shinebox into your CD player, COME AND GO has mastered the art of the hook. The band's sound draws on the raucous energy of Southern rock, the strong songwriting sensibility of the alt-country movement and the soaring vocals and musicianship of classic California pop. Much of the energy of COME AND GO stems from the sibling rivalry of brothers Shane and Shannon Hudson. The brothers are musical vagabonds who lived all over the Midwest, Oklahoma and Texas before landing on the green hills of Malibu, California in 1997. 'It's odd being in a band together' says older brother Shane. 'Growing up, we always fought each other. We really didn't play music together until six years ago.' Shannon explains, 'I moved out to California to go to college at Pepperdine. When Shane showed up, I was already playing in coffee houses. We decided we should start a band and make music together.' So that's just what they did. And, like many ambitious musicians, they started booking gigs before there was a formal band, eventually settling down with the current lineup - Shannon Hudson, lead vocalist; Shane Hudson, guitar and backing vocals; David Freeman, bass; and Oklahoma's own Chuck Irwin on drums, a basher who learned his ABCs from Tommy Aldrich, Terry Bozzio and Peter Criss. COME AND GO has many strengths: Shannon's strong lead vocals, the harmonies, the driven rock styling of David Freeman's bass guitar work, Shane's big guitar sound and Chuck Irwin's relentless drumbeat. The tunes sport memorable melodies and insightful lyrics, ranging from playful to poignantly romantic declarations, and guaranteed to melt the hardest of hearts. There's the big guitar noise and sing along chorus of 'Sugar,' the lively, optimistic chorus that gives 'New Morning Light' it's anthemic feel and the pounding, R&B flavored groove of 'Don't Stop.' But it's the songwriting skills of the Hudson brothers that make COME AND GO special. 'Our music is inspired by motion,' Shannon says. 'The way life passes you by, the activity of everyday life.' Shane adds, 'There's not a lot of rhyme or reason to my songwriting method. I can write walking down the road eating hot dogs in the rain, or just get inspired based on a conversation I just had with someone.' When a song is near completion, they bring it to the rest of the band to be arranged. 'As a band, we try to capture what the writer wanted to say,' Shane says. 'We don't add parts to make it our own. Instead we try to make it sound more like the writer wants it to sound.' And the end result is a classic rock sound with a strong country flavor. COME AND GO began hitting the LA clubs in '99, and built a buzz with successful gigs at the Whisky A Go Go, Viper Room, and El Rey Theater and a series of self-produced and distributed albums. 'Our first album, Smoke, was recorded on a VX 880 in Shane's bedroom,' Shannon recalls. 'We did the vocals at our house, and I had to gargle Jack Daniels to finish the vocals because I had a sore throat. It was all originals, very raw. We sold it at our shows, but it was mostly done as a demo to get gigs.' Album number two, Not Dead in LA, caught COME AND GO live at the legendary Whisky A Go Go. In 2001, they cut Out Of the Valley at Expression Studios in Emeryville, CA. In a frenzy of creativity, the ten-song album was recorded, mixed and mastered in a lightening fast 24-hour period. 'It captured our sound,' Shannon says, 'but it was almost rawer than the home studio stuff.' The band sold 1,000 copies of Out Of the Valley and became a mainstay on the LA club scene, receiving an honorable mention in the LA Weekly's annual MVP Awards, a survey that tracks the town's best new acts. The band's hard work paid off last year, when COME AND GO signed with the Texas-based Purify Records after touring in Texas and New York. Purify teamed up the band with producers Scott Gordon (Aerosmith, Alanis Morrisette) and Dustin Boyer (Descanso) to record their debut album, Shinebox at the famous Sage and Sound Studios in Hollywood, California. As label head Jon Mark Harmon says: 'Purify believes in seeking out talented people and letting them do what they do best. When I saw Come & Go live the first time, they stood out as a band ready to break; they had an amazing live show and tunes that instantly stuck in your head. We're ecstatic about the release of Shinebox and proud to be associated with such talented artists.' 'We just try to put out good old American rock 'n roll,' Shannon explains. 'We are a working person's band. We're all coming from real day jobs, and we love making music together. We're very influenced by the American landscape and the sense of everyday life in the U.S.'

Here's what you say about
Come & Go - Shinebox.