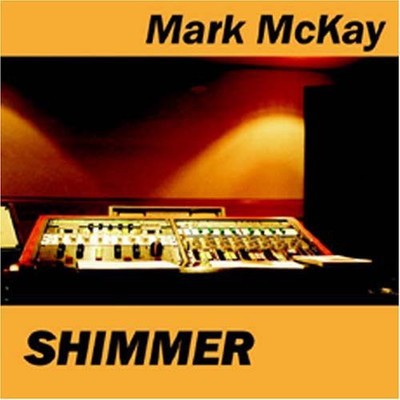 Mark McKay has earned a reputation for writing rugged and beautiful songs in the tradition of rootsy rock'n roll; his work is often compared to that of Alejandro Escovedo, Cracker's David Lowry, and a Nebraska-era Bruce Springsteen. On Shimmer, his collaboration with producer Eric 'Roscoe' Ambel, McKay unleashes material that is philosophical, romantic, and at times political, delivered in a style that is musically both spontaneous and expertly calculated, resulting in his boldest album to date. Shimmer is an album that sounds big and true; electric guitars churn and moan over a driving rhythm section while individual songs are colored by organ, piano, cello, trumpet, and other instruments from Ambel's Cowboy Technical Services recording studio in Brooklyn. Shimmer is the sound of McKay's adventurous creativity both as a recording artist and performing songwriter and retains a rich live vibe. Live from the Memory Hotel (Dren 2003) captures the intimacy and energy of Mark's acoustic and electric performances from several shows in 2002 with special guests Kris Delmhorst and the band June Star. Renowned Brooklyn artist Steve Keene contributed original art for this album which was mastered by Scott Hull at the Hit Factory in NYC. Mark recorded his critically acclaimed debut album, Nothing Personal (Dren 2001) in Boston with producer Ducky Carlisle. Mark's version of 'Fatal Wound' appears on For Anyone That's Listening, A Tribute to Uncle Tupelo (Flat Earth 2003). His interpretation of 'I Know You Rider' appears on Ain't No Grave (Dren 2003), a compilation of traditional music. His rendition of 'Who'll Stop the Rain' is the lead track on Chooglin': A Tribute to the Songs of John Fogerty (Dren 2002) and his solo version of 'St. Matthew' appears on Papa Nez: A Tribute to the Work of Michael Nesmith (Dren 2001). Mark performs in some of America's finest rooms, including Iota Club in Arlington, VA, the Ram's Head Tavern in Annapolis MD Fletcher's in Baltimore, the Point in Philadelphia, the Rodeo Bar and the Lakeside Lounge in NYC, the Lizard Lounge in Boston, and FitzGerald's and Schuba's in Chicago. His music is receiving airplay at over 100 stations worldwide, including at WFUV in NYC, WXRT in Chicago, KDHX in St. Louis, WRNR in Annapolis, and WMBR in Boston. Mark McKay hails from Washington DC. The power-pop melancholy of Matthew Sweet, the alt-country throttle of Uncle Tupelo, and the tattered insight of Townes Van Zandt all rolled into one potent little number.' -- Harp Magazine 'Literate and understated, subtle and charged, roots-rocker Mark McKay makes music that fits alongside the likes of Steve Earle and Springsteen; an alt-country force.' --Village Voice 'Lyrically, McKay trusts his instincts and ventures into the abstract; the smaller moments are microcosms, adding up to much more than simple 'loved and lost' tunes....' -- Paste Magazine 'Mark's stuff is roots rockin', and the lead track's got a great pop hook.' -- NPR's All Songs Considered 'it is refreshing to hear an artist who understands how to craft memorable, interesting songs.' --AMG rating ****.

Here's what you say about
Mark McKay - Shimmer.