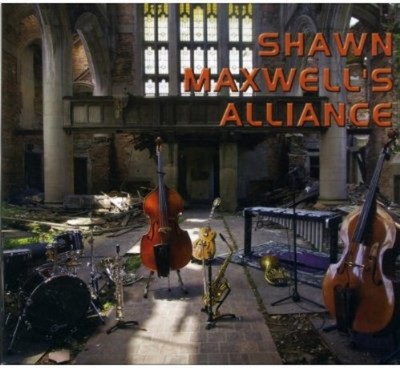 Shawn Maxwell - alto & tenor saxophones, flute, clarinet; Chris Greene - soprano saxophone; Keri Johnsrud - voice; Stephen Lynerd - vibraphone, percussion; Mitch Corso - guitar; Rachel Maxwell - French horn; Meghan Fulton - French horn; Stacy McMichael - bass; Marc Piane - bass; Paul Townsend - drums. Produced by Shawn Maxwell and Nick Eipers. Engineered by Nick Eipers. REVIEWS: Downbeat Magazine - Editor's Pick ; February 2014 "The 18 original compositions strike a balance between merely improvised sketches and meticulously constructed large-ensemble works. Particularly compelling are the wordless vocals of Keri Johnsrud. Singers frequently talk about their instrument being on equal footing with the other players on the bandstand, and that's certainly the case with Johnsrud's contributions here... Most of the pieces here are short, with 13 tracks that clock in at under four minutes, which keeps the pace lively throughout the hour-long program. The sturdy, insistent grooves of songs like 'Fun Five Funk' and 'Looking For Alex' are hard to resist. Bravo." - Bobby Reed' Downbeat Magazine "Maxwell's scores proved as unusual as his taste for instrumental color, the pieces shifting from jazz-swing rhythm one moment to classical downbeats the next, from bebop phraseology to long and incantatory phrases to perky, funk-tinged melody making... Nobody writes like this." - Howard Reich' Chicago Tribune "Not exactly the sort of band you're likely to hear in anyone's notion of the mainstream and thus highly attractive to progressive ears... might best be compared to the Canterbury sound (Egg, Caravan, Hatfield & the North, etc... with Penguin Cafe Orchestra to one side) played by cavorting elves, dwarfs, fairies, nymphs, and Puckish hobbits auditioning to play in Queen Titania's New-Mown Grass Symphonia." - Mark S. Tucker' Folk and Acoustic Music Exchange "4 Stars ...jaunty, angular melodies, deceptive time signatures, and metronomic rhythm arrangements... Strange, innovative, a little something outside the box." - Grady Harp' Amazon.com Top 50, Vine Voice & Hall of Fame Reviewer "...the group's musical aesthetic owes a good deal to the musical ideas of Philip Glass and Frank Zappa. It is not so much that Maxwell is copying what they do, but rather that his music is growing out of the same soil that produced them... The ensemble has an arresting sound that fits with the edgy nature of the album's music." - Jack Goodstein' Blogcritics.org "...a carefully orchestrated suite with a subtle yet distinct dramatic sense... The fantastical 'Iynes Crayons' opens with a stately, almost baroque theatricality... The record is also imbued with poetry as the intriguing four-way conversation on 'From Parts Unknown' demonstrates... Hints of Levantine mystique appear on such pieces as 'Shadowbox' and 'Perpetual Day One' ... Maxwell and his Alliance can also get down and dirty with a heavy funk infused groove like on the soulful 'Pistols N' Tulips' ... The exquisite balance of orchestration and individual freedom of expression together with Maxwell's compositional ingenuity and deft leadership make the album a singular work of true musical fusion." - Hrayr Attarian' AllAboutJazz.com "I've not heard anything quite like this. Maxwell's composing seems to draw from many sources; minimalism, Zappa, Rock backbeats... short threads of avant jazz ... Different. Accessible yet adventurous." - Tom Tintle' WRUV 90.1FM, Burlington, VT "all the moving parts make for a terribly thrilling experience... When the ensemble settles in and hangs their hat on a patiently expressed melody (as they do on 'Song for Something Else'), they show that the music's abiding hyperactivity is a choice, not a compulsion, and really, that makes the music that much more exciting... Recommended." - Dave Sumner' Emusic.com "Shawn Maxwell doesn't seem intent on following the traditional rules... Maxwell and company's eighteen new tracks manage to touch every corner of the jazz landscape while remaining accessible to even the most novice jazz listeners." - Katie Karpowicz' Chicagoist.com "With the kind of vibe that makes it feel like a domestic travelogue through a lot of jazz back alleys, this is sitting down jazz that isn't for eggheads or work to listen to... An out of the ordinary set that knows how to color outside the lines in just the right way. Check it out. " - Chris Spector' MidwestRecord.com "...this special union begat is predictably unpredictable, too. In the best possible way... It's not just the weapons used but how they're deployed. Maxwell exploits selective layering and counter harmonies in tactful ways such that it doesn't ever sound overly dense or cluttered... Shawn Maxwell's Alliance is a large jazz band album that's made for those skeptical about large bands." - S. Victor Aaron' SomethingElseReviews.com "...jazz you'll not soon forget... Most highly recommended" - Rotcod Zzaj' Improvijazzation Nation Magazine "The unusual array of instruments and voice used in this recording is almost magical... an excellent performance" - O's Place Features "...this is no ordinary big band... Maxwell has a dry musical sense of humor that he uses to challenge the listener to hear at higher levels. His 'big' band magnifies this effort." - C. Michael Bailey' AllAboutJazz.com "The tonal palette employed here, with the high reeds and vibes leading the way, recalls the performing unit that classical composer Glass used during the 70s, when he burnished his minimalist compositions to notable popular success. And many of Maxwell's tunes - with their jaunty, angular melodies, deceptive time signatures, and metronomic rhythm arrangements - sound as if inhabited by the ghost of Zappa" - Neil Tesser (from the album notes) BIO: As a performer and composer, Shawn Maxwell has established himself as a creative force on the vibrant and diverse Chicago jazz scene. For more than a decade, he has been leading his own groups with some of the city's top young talent, and is an accomplished sideman on stage and in the studio. Prior to Shawn Maxwell's Alliance, he has released four albums of all original works: Originals (2005), Originals II (2008), Maxwell's House (2009) and Urban Vigilante (2011), the latter two on the Chicago Sessions label. Shawn Maxwell's Alliance started as an experiment; a gathering of friends to play some new music without stereotype or limitation. The resulting debut album stands as a new approach and direction, adding unusual instrumentation and distinct arrangements to Shawn's powerful voice.