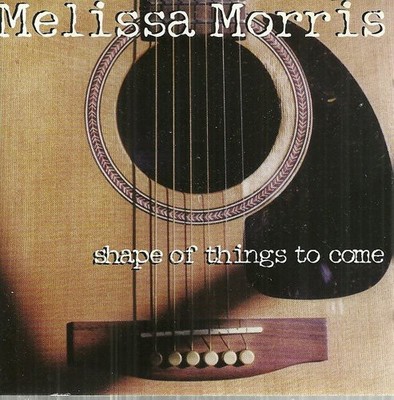 '...rich, dexterous voice and pleasing folk-pop melodicism.' --Scott Alarik, The Boston Globe 'The wait was long and arduous, but hopefully this album is what it's title says.' - Matthew S. Robinson, Soundcheck Magazine 'This is someone to watch out for in the Boston music scene.' - Madalyn Sklar, GoGirlsMusic.com Melissa Morris has spent a life following her belief in music. The Shape of Things to Come, Morris's debut album, is full of the influences and experiences she has been collecting since her childhood in Texas. Some of her earliest musical memories include her father playing original cast recordings of musicals and standards by legends like Frank Sinatra and George Gershwin. From there, Morris's collection of musical influences expanded to include such artists as the Bruce Springsteen, the Police and Peter Gabriel. 'I remember listening to 'Nebraska' or 'Synchronicity' and feeling so close to the stories that I could imagine myself in them, and then turning around and listening to 'Security' and being equally transformed by the power of the world instruments and rhythms in all of the songs.' Morris originally chose music therapy as an outlet for her musical skills: 'I wanted a career that allowed me to combine music with my desire to help those in need.' Morris eventually found music therapy too demanding a career to allow her to focus on her own performing career. She decided to leave the profession in 1997 to concentrate on music solely as an artist. Fortunately, one of her therapy jobs was in Boston, where Morris was exposed to such talent as Peter Mulvey, Jennifer Kimball, Joe Panzetta, Chris Trapper (of the Pushstars), and Ellis Paul. 'If I hadn't spent time in Boston as a music therapist, I wouldn't have had the fortune of discovering such masters of lyrics and musical line, nor would I have been able to see them perform live. That was the ultimate catalyst for starting to write and play music again.' Morris returned to Texas for two years to start honing her lyric and guitar skills before she returned to Boston in 1999, this time as an artist. She worked her way through local open mic nights and played the subways, eventually assembling the cast for Shape of Things to Come -- some of the brightest talent in a burgeoning Boston acoustic scene. 'The CD became a sort of family project for me and I believe for everyone involved, especially the other musicians. The open mic scene is a unique animal in Boston; most people are there to actually hear you and to encourage you.' Morris's arrival in the arena of acoustic music couldn't be better timed. 'I think I'm lucky to be contributing to the Boston music scene at a time when women artists continue to gain credibility not only as competent players and singers, but also as intelligent writers.' Released in mid-December 1999, Shape of Things to Come is a rich, versatile debut, slipping effortlessly from the laid-back sound of 'Rooftop' and the spacey funk of the title track to ethereal acoustic ballads like 'For You.' Morris's voice is as versatile as her music; she handles the jazzy 'What Makes You Think' as easily as she does her smoky cover of the Police classic 'Tea in the Sahara'. And though songs like 'Breathing Room' and 'Fall Into You' are intensely personal, Morris avoids using her music as an excuse to vent on a captive audience. 'I try to avoid using my music as a channel for angst or despair. I think that becomes tedious for a listener after a while, no matter how universal the topic.' Instead, Morris leaves herself open to express her most meaningful experiences, big or small. 'Sharing a smile with a friend during a great conversation, watching a sunrise from a rooftop or watching the first leaf fall from a tree in autumn can be as much of a catalyst for a song as a major event can be.' Shape of Things to Come is full of such moments, large and small.

Here's what you say about
Melissa Morris - Shape of Things to Come.