Unckle Eddie - Shake the Dust Off 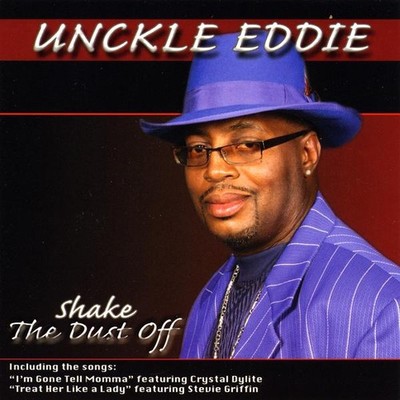 Unique 'easy to groove to' incorporating blues, funk, soul and folk with great lyrics and story lines and good dance floor music. Unckle Eddie is synonymous with the words "prolific" and 'Black Magic Woman.' Prolific because of his ability to write and produce song after song. In other words, Unckle Eddie's varied musical style and lyrical talent is "unending and fertile" like a music factory. Before his new CD ('Shake the Dust Off') Unckle Eddie was mostly known for his 'signature' hit single, 'Black Magic Woman' from his first project ('Party Tonight,' 2004). That song put him in the lime light in some key areas in the Southeast and along the Gulf Coast including Mississippi, Louisiana, Florida and Alabama. 'Black Magic Woman" is so popular that it's often refered to as a Mardi Gras song. With the release of his new CD, ('Shake the Dust Off'), Unckle Eddie is literally taking the blues airwaves by storm with his new singles: 'I'm Gone Tell Momma,' 'Talking in Your Sleep,' 'Butch Didn't Attack' and 'At the Cabaret.' Unckle Eddie was born in Chicago, IL and he says it best, "I was immediately shipped South. I got off the boat in Philadelphia, MS and I've spent most of my adult life in the Mississsippi area around Moss Point and Pascagoula." He started writing music and songs when he was in junior high school and his music is not genre specific. 'My writing ability allows me to be very diversified in terms of genres. People compare and describe my music in different ways. I enjoy that. I appreciate that because that's who I am. Unckle Eddie is a song writer and I write all kinds of songs.' Radio personality 'Lady Rusty J' of WNHU says, 'Unckle Eddie's musical style reminds me of the late legendary Jimmy Reed (best known songs, "Honest I Do" and Ain't That Lovin' You Baby.") The thing about Unckle Eddie is, like Jimmy, he creates music that is simple and easy to groove to; however, Unckle Eddie further completes his total package with his ability to deliver rhyming lyrics line after line, non-stop. I believe Unckle Eddie's formula will successfully appeal to black and white audiences. Unckle Eddie offers that country-blues feel known from the southeast region.' Unckle Eddie's songs all carry their own unique message, so it's not hard to believe that he started his professional musical career as a rapper. The common denominator in all of his songs is that everyone can relate to his messages. Unckle Eddie is a great entertainer and his live performances compliments his ability to cross over several genres and styles. He definitely has a sense of humor and believes in his music and that comes across strongest when he's on stage. He keeps the crowd hyped and the party going. Unckle Eddie started his own label, Toljadol Records in 2004 and primarily produces 95% of his music.

Here's what you say about
Unckle Eddie - Shake the Dust Off.