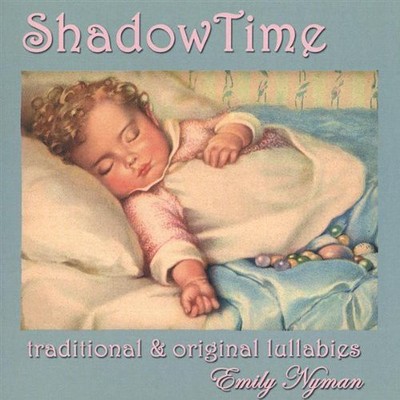 'ShadowTime' is Emily Nyman and Lynn Berry's third CD. It is a collection of traditional and original lullabies. Using soothing vocals, piano, and guitar, these arrangements are specially formulated to relax the listener and lull your little one to sleep. Emily and Lynn have worked extensively with children and understand the importance of music in child development. Emily has a Master of Arts degree in Psychology (Bridgewater State College) and Lynn has a Masters degree in Education (College of New Jersey). Both are certified guidance counselors (Kindergarten thru Grade 12) in Vermont. Their music has been used therapeutically in hospital and school settings. 'ShadowTime' contains traditional favorites and original lullabies carefully arranged and recorded to ensure a relaxing, peaceful experience for the listener. Emily and Lynn have been inspired by the artwork of Annie Benson Muller, Emily's great grandmother. Her paintings grace the CD cover and insert. Like lullabies, they comfort and remind us of the innocence of childhood. More of the story: Emily has been writing and performing original songs since childhood. Her musical foundation includes classical piano and folk guitar. A Cape Cod native, Emily developed her musical talents in the Wareham High School Choir and the Young Time Players Community Theater. During the 1980's, Emily performed regularly in the Upper Cape Region and Amherst area. Emily attended UMASS Amherst and Bridgewater State College, obtaining a Master's degree in Psychology and then moving to Vermont in 1990. While interning as a Guidance Counselor, Emily met Lynn Berry, Guidance Counselor, Artist, and published poet. When Lynn shared her poems and Emily shared her music, a songwriting team was born. While Emily's day job is full-time Guidance in a regional Junior High School, she incorporates music into her every-day life. In the JH, she runs guitar club and performs with the Jazz Band. She teaches Guitar and Piano classes at the Community College of Vermont in Newport. Emily performs part-time in venues from the Northeast Kingdom of Vermont to the Jersey Shore. She volunteers for Hospice, using music to soothe terminally ill patients and their families. She has received rave reviews in "Out in Jersey" magazine for her album and performances. Emily and Lynn have been involved in theater, providing original music and cover tune adaptations for a reader's theater production of senior women's essays entitled "Memoirs." Emily has appeared on the CBS/WCAX TV Morning Music Showcase on several occasions. Her music has been aired on Vermont public radio, WOMR Provincetown, Rainbow World Radio, and Sirius Radio. Emily and Lynn's music has also been aired extensively on the Internet, earning top 40 status on Rainbow World Radio for June and July 2005. Emily was a finalist for favorite female musician in the Pride in the Arts Award (Stonewall Society). In January 2007, Emily and Lynn were interviewed on Pat Marino's Sunset Cruise show which often receives requests for their music (Sirius Radio 109Q). "Poet-Painter" debuted on this program, a song inspired by the story of Jim Wheeler, a gay teen who ended his life in the wake of intolerance. Emily performed "Poet-Painter" at Equality Forum's Teen Panel presentation in Philadelphia in May 2007. Over the last 10 years, Lynn and Emily have released several CD's. "First One", released in February of 1998, is a collection of original songs based on Lynn's poems about growing up, family, love, and loss. "Outside the Lines", released in June 2003, is a collection of songs which portray the search for freedom and the desire to live in a peaceful, accepting world. They released their 3rd CD "ShadowTime", a collection of traditional and original lullabies, in July 2004. "Emily Nyman by request", a collection of most often requested cover tunes, was released in August 2006.

Here's what you say about
Emily Nyman - Shadowtime.