Bergevin Brothers Music - Seven Songs for America & One for the World 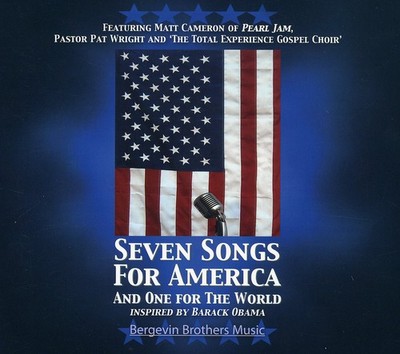 Featuring Matt Cameron of Pearl Jam and Pastor Patrinell (Pat) Wright and the Total Experience Gospel Choir. The story of \'Seven Songs for America - And One For the World\' begins with one Barack Obama supporter at a campaign event in Greenwood, SC. When the candidate arrived looking weary, Edith Childs, a 59-year-old councilwoman and nurse, spontaneously energized the event with a shout, \'Fired up, ready to go.\' Though she recalls that her chant startled the candidate for a moment, Senator Obama was charmed and has since used the moment to motivate people using the phrase, \'One voice can change the world.\' Months later, enter Joe Bergevin, a Seattle-area songwriter who had the opportunity to speak for a moment with Senator Obama at a Washington event. As he shook the Senator\'s hand, Joe told him he thought he was going to \'get the job done.\' Joe remembers Obama looking him in the eye and without hesitation responding, \'With your help I will, with your help.\' Challenged, Joe found a way to respond creatively and wrote some lyrics and music. Soon, he had his brother and longtime music collaborator, composer,arranger and pianist Jon, involved in the project. Together they refined and finalized the song. Ten extraordinary days later, an epic recording was born in a renovated theater with a recording studio. Contributors included Rev. Pat Wright, the lead singer, and her highly regarded Total Experience Gospel Choir; Pearl Jam drummer Matt Cameron; Jake Bergevin, lead male singer; and a crew of Seattle's best studio musicians, sound engineers, video teams, photographers, caterers and local news teams. A video of the recording session, along with spin-offs that use the music, have been viewed on YouTube over a quarter of a million times. From the first word written to the last note performed, the participants donated their time and talent. The collective effort is a manifestation of Barack Obama's ability to inspire and unify Americans from all walks of life. From that one song, this album was born, demonstrating that one voice can change the world. Barack Obama is a great leader whose words inspired an album of seven original songs for America and one for the world. We hope that it inspires you to organize a project with members of your own community. All profits from the sale of the album will support Rev. Wright's outreach ministry to the survivors of Hurricane Katrina who still need our assistance.

Here's what you say about
Bergevin Brothers Music - Seven Songs for America & One for the World.