Tapas Musica - Serve It to Me Hot 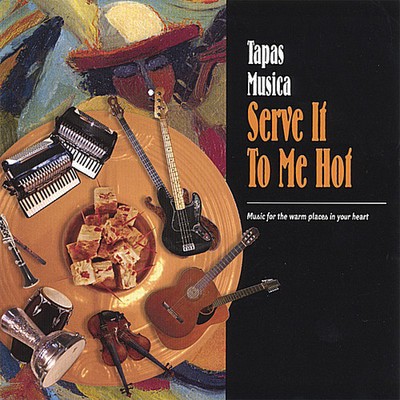 Tapas Musica Craig Russell is an accomplished and gifted musician, playing a wide variety of instruments, including piano and various keyboards, guitar, bamboo flutes, clarinet, accordion, and percussion. His love for music was spawned at an early age as he received classical training and has been involved in many music productions thru out the years. His love for warm and exotic ports of call was expressed, just to mention, in two CD projects called Bamboo and Bamboo tales. He is good!! Nadya Russell is an exciting violinist who has steeped herself in ethnic as well as classic style, and has performed with Klezmer bands at the Seattle Folk life festival. She has studied and has a love of many different cultures, but also manages to work occasionally on a ranch in Oregon herding cattle, as she has an intense love for horses. She is a mysterious and wonderfully complex individual indeed, and her feel for expression on the violin is free and seemingly unencumbered. All of this and she has a wonderful crooning hypnotic voice. Tad Suckling is a creative force. His love of music was evident at an early age when he promptly absconded the guitar his sister got for Christmas from her room and just kept going. His primary focus has been on writing and had the honor of writing a song called "Molokai Slide", that became a huge award-winning hit in the Hawaiian Islands in 97', winning the prestigious Hoku award for song of the year. It continues to be a popular and regularly played song. His ability to capture a story in a song both lyrically and musically is seen on this recording in an evident display. Ginny Gaylord, Tads daughter, is relatively new to this type of music but grew up with piano training and one year when her husband got a bass guitar for Christmas.... well, you know the rest of the story. She frequently visited the Hawaiian Islands as she was growing up, and thru out her life her exposure to various tropical life styles has wooed her into this musical endeavor. She is a driven young lady and has contributed greatly to the formation of this project. The original songs on this album were inspired by times, events and warm places both physically and in our hearts.

Here's what you say about
Tapas Musica - Serve It to Me Hot.