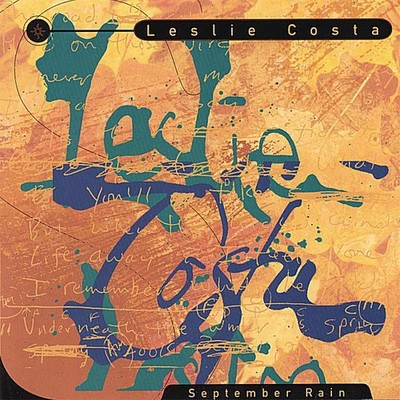 Born and raised in Mt. Kisco, NY, a Westchester suburb of New York City, Leslie Costa has been playing music all her life Ever since she was five, she was either picking up her father's ukelele or sitting down at the piano. She played clarinet in second grade and hated it. After that, sports took over her interests. Ironically, she rejected her mother's offer for guitar lessons in fifth grade. However, at age twelve, things really changed. She fell in love with the guitar after her cousin Chris let her try his 1969 Fender Stratocaster. It has been the longest relationship she's been involved with ever since. She is self-taught both on acoustic and electric guitar. Her early influences include Bob Dylan, Neil Young, Cat Stevens, Fleetwood Mac, The Eagles and most of all Jackson Browne. It was during that time her parents were not in support of the singer/songwriter rock-based music Leslie was pursuing. Instead they, along with her junior high and high school teachers, were hoping she pursue a classical music education at Julliard on cello. She was a classically-trained cellist from 10 until eighteen assuming the first seat in the school orchestras. She studied privately with Barbara Levy in Westchester, a prominent cellist. Leslie attended several music theory and composition courses both in high school and college. She decided classical music was not for her. She attended The University of Brideport and graduated cum laude with a B.F.A. in graphic design on a four-year tuition sports scholarship for field hockey. She received many honors both in high school and college for her athletic abilities. Leslie joined her first band, Sundance, a Fleetwood-Mac, Eagles, CSNY cover band during her senior year in high school. During her first couple of years at college, Leslie retained her working relationship with Sundance bandmate Claire Pulise in an all original Philadelphia-based band. After that, Leslie played in various original bands that had no solid longevity. She formed her own band in 1990 called Leslie Costa and the Usual Suspects. The six-piece band played steady gigs in and around Fairfield county Connecticut, Greenwich Village, New York and North Hampton, Massachusetts. Her contemporaries include artists like: Tom Petty, John Mellencamp, Melissa Etheridge, Sheryl Crow, Counting Crowes and Natalie Merchant. The efforts of that band attracted serious record company attention by Seymour Stien of Sire Records and Bob Krasnow of Elektra Records. At the time, all the record companies were looking for another Pearl Jam. Leslie seemed to be ahead of the women's' movement of the mid 90's. During the six years the band was together, they recorded two cassette tapes and the CD September Rain. September Rain is a collection of dark romantic folk-based rock with poetic conviction The CD was voted #2 by the Fairfield Advocate who also voted the title track 'September Rain' #1 song of the year by a local artist. Shortly after the release of the CD, the band dissolved. Leslie took two years off before returning to the local music scene. Leslie has established herself in Fairfield county Connecticut and has been very well received during many local appearances. She has gained recognition through the local newspapers, a loyal local following and is well-respected among the musicians' community surrounding her. She is anxious to get her band and songs out to a larger audience. She plans on releasing her next next CD entitled 'Mission Bell' due out fall 2003.

Here's what you say about
Leslie Costa - September Rain.