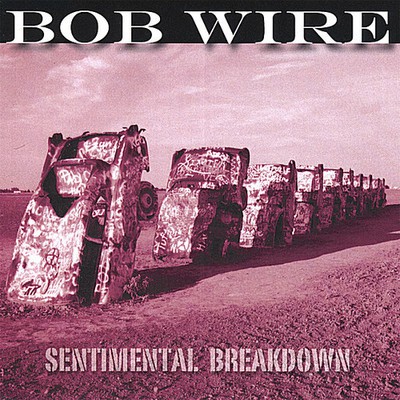 Can Bob Wire Save Country Music From Itself? The release of Missoula, Montana honky-tonker Bob Wire's new CD, Sentimental Breakdown, delivers another kidney punch to the soft white underbelly of modern country music. Wire's mix of irreverent lyrics and rootsy, dance-floor-ready arrangements provides a solid alternative to the bland, over-processed music that passes for country on today's radio stations. Recorded in Missoula with his band over the winter of 2007-2008, Sentimental Breakdown serves up ten original songs and one cover that showcase Wire's sturdy baritone, which veers from a Johnny Cash growl to a Brian Setzer wail, sometimes in the same song. One local wag dubbed him "The Burlap Fog," a take-off on Mel Tormé's handle, the Velvet Fog. Like Robbie Fulks, whom many consider the kingpin of alt. Country, Bob Wire trusts his fans to be able to think for themselves, and to have an appreciation for his twisted worldview. "A few reviews of 'American Piehole' (his 2006 solo debut) had something like, 'well, he's no Robbie Fulks, but...'" says Wire. "And I think that's fine. I'm not trying to be Robbie Fulks. There's already a Robbie Fulks. And I imagine more than one music critic has written about Robbie, 'well, he's no Bob Wire...' I mean, it probably hasn't happened, but I imagine it." "Cadillac Jones" opens the CD, and it's brisk blues-rock guitar figure and sing-along chorus sound both fresh and familiar at the same time. There's also a classic, honky-tonk shuffle that sounds like it would have been right at home alongside the works of Faron Young, Lefty Frizzell, and Ray Price in the mid-50's. The song, "My Heartache and Me," features guest Bob Athearn of Missoula's Full Grown Men playing some classic, Floyd Cramer-style barrelhouse piano. But Wire can't play it straight for very long, and at least half the songs on the CD are laugh-out-loud funny with their wry observations of modern relationships and life in general. The subject matter ranges from a raisin farmer defending the "sweet and wrinkly little snack" ("In Defense of the Raisin") to a happy-go-lucky Christian who loves the fact that he gets a "brand new start" every week ("Jesus In My Heart"). A staple of their live show closes out the disc, a raucous run through of John Denver's oft-covered "Country Roads." But you've never heard it played quite like this breakneck version, which features two guest lead guitarists. "Sentimental Breakdown" is chock full of sonic surprises, rib-tickling lines, and a good-time feel that infuses the whole set with a potent energy that makes you want to see these guys perform live. Fortunately, Bob Wire and his band have several dates booked in and around Missoula for the rest of the year, and you can catch their tequila-fueled shows where they'll no doubt be pounding out most of the songs from Sentimental Breakdown, as well as a couple dozen other original nuggets guaranteed to have you dancing and laughing at the same time. Just don't ask them to play any Hot Country-you might wind up wearing a box of raisins where the sun don't shine.

Here's what you say about
Bob Wire - Sentimental Breakdown.