Ryan Long - Send Up a Flare 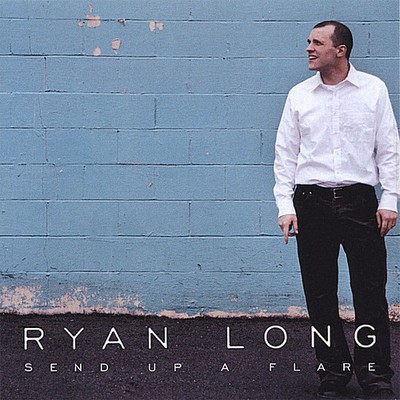 When you first hear Ryan Long sing, you feel as if you could sing along with him. Even for those new to his music, his songs take us into a story so lyrically engaging and so detailed by chord and melody that by the end we believe his smooth baritone vocals are meant for us. Long started playing guitar and writing songs at nineteen while studying engineering technology at East Tennessee State University. His great love of story songs was inspired by James Taylor and Garth Brooks, but it is his unique twist on Appalachian folk-pop that has made him a light in the same music circles supporting John Gorka, Pierce Pettis, and David Wilcox. In 1997, Ryan began a relationship with Young Life performing regularly throughout the U.S. at their more than twenty camps. By the end of 1998 he had released his debut record, Cry for Me, produced by Michael Aukofer at Word/Myrhh studios in Nashville. Cry is filled with a host of skilled contributors including Phil Keagy, Phil Madeira, and Cristi Johnson of Alathea and with such diverse instrumentation as Hammond organ, hammered dulcimer, and Celtic bagpipes. The following year as audiences and attention grew larger for Long, two compilations featuring his music were released. Paste put out their Paste Music Sampler 1 containing "Face It Alone" from Cry for Me. Also that year, The Awakening Compilation, vol. 3 was released with Long's title track from Cry for Me. In 2000, Alathea recorded a version of "Gypsy", originally co-written by Long and Brad Layher. That same year Ryan also recorded "Gypsy" on his new record, Waiting by the Window. Produced by Aukofer at the Whitehouse in Nashville, Waiting was later dubbed the "Best Follow-up CD" of the year by Paste Music. Waiting, while having the same intimacy, capable cast, and dynamic instrumentation as Cry, really stands out for it's soulful and bluesy melodies that move you as much as the stories they -----set the stage for do. As more critical acclaim came for Long, Grassroots Music added the opening cut from Waiting entitled "The Wind in Me" to their Dialects compilation for Americana/Folk. For Send Up a Flare, recorded in 2003, Long worked with producer Ed Cash. Bringing in only three other artists, Cash focused on Long's vocals and guitar. With this minimalistic approach, Ryan's vibrant and stimulating music and his complex lyrical narratives lend obvious depth to Flare. His great advances in maturity are revealed on this record through his sincere vocals and inventive guitar accompaniments. Although Ryan's recordings have been filled with supporting artists, he has chosen throughout the years to travel as a solo artist. His personal and introspective lyrics and his intimately connecting stage presence have brought him an ever-increasing number of staunchly loyal fans and friends every year. Ryan currently lives on Signal Mountain in Chattanooga with his wife Carmen and his daughter Rebecca and son Carson.

Here's what you say about
Ryan Long - Send Up a Flare.