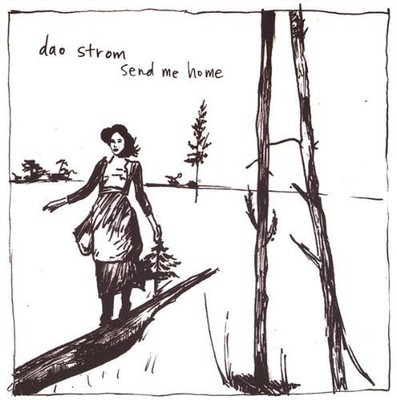 BIOGRAPHY Dao Strom was born in Saigon, Vietnam and grew up in Placerville, California-which perhaps explains why her version of Americana & oldtime-influenced roots music seems to come out of a world-weary darkness that is both mysterious and familiar. Her voice carries the ethereal weight of the Appalachias (or some other distant mountain range), yet her words and phrasing are plainly infused with the details of modern experience. Citing influences from Hazel Dickens, Loretta Lynn, Emmylou (and many other country music traditionalists) to Gillian Welch, Freakwater and Bonnie Prince Billy, Dao's own take on the genre is a form of gentle, dark Americana tinged with a pure quality. It's lonely music but conveyed with an insightful innocence. Dao came to Austin via California-Iowa-New York. Other songwriter friends eventually led Dao and her bandmates to Brian Beattie, whose authenticity-principled, retro-integrity recording techniques (The Dead Milkmen, Daniel Johnston, Shearwater, Okkervil River, Torch) it seemed would suitably capture the nuance and humble, gentle feel of their music. 'Send Me Home' was recorded entirely live on a late-50s era 2-inch analog tape machine, in Brian's wife Valerie Fowler's painting studio. Dao Strom is also a novelist whose first book, Grass Roof, Tin Roof, was published in 2003 by Houghton Mifflin. She is currently at work on a second novel, The Gentle Order of Girls and Boys. She divides her time equally between writing fiction and writing songs. 'What kind of music is this?' It's probably more indie than alternative country, it's dark and melancholy at times but also has a lot of niceness and hope to it, it has humor but it's subtle, it strives to be pretty but not too pretty, and it strives to be as simple and honest as it can be. 'Where is home?' I have been asked this question several times, and there have been assumptions that home is Vietnam, where I was born, or that home is some place with pine trees and cold mountain rivers, because of the frequent mention of such places in my songs. The best explanation I can find for the idea of home as it appears in the songs on 'Send Me Home,' and in the song itself, comes from a Buddhist parable I have read about a woman, a Buddhist nun, who is traveling and she is very tired and hungry when she comes to this town, but when she asks no one there will give her shelter for the night, as they are opposed to her religion or are afraid of being associated with her because of it. So she finds a place to sleep out in the woods somewhere. It is cold, and she wakes in the middle of the night to see the full moon shining through the tree branches above her. She realizes that had she been given shelter for the night she would not either have received this vision of the moon, which is very lonely and beautiful. And she is grateful then at having been turned away by the people in the town. Not that I am always seeking to be cast on the outside of things, just that maybe there is a sort of 'out there' feeling I'm more familiar with than I am with any defined concept of home.

Here's what you say about
Dao Strom - Send Me Home.