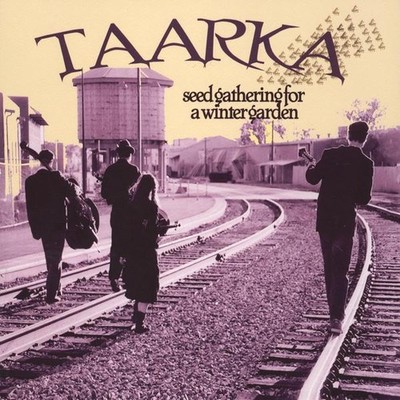 "Youthful zeal, classical training, a penchant for old-time music, and a bountiful batch of original tunes make Taarka a string band deserving of attention...There are Gypsy-jazz, bluegrass, Celtic, chamber-folk, jazz, rock, and even Indian influences, all distilled through a gifted group that has toured extensively on the jam-band circuit, but who at it's best sounds unlike anyone else in that genre...this eclectic quartet has harvested a bountiful feast of new string-band music." Greg Cahill, Strings Magazine, (national), Published Oct. 2009 "...the four performers are drawn equally to backwoods fiddle tunes, the avant-garde acoustic music pioneered by mandolinist David Grisman, storytelling singer-songwriters, and the swinging jazz of Django Reinhardt. At times, however, there seems to be a rock band lurking just underneath the surface..." Alexander Varty, The Georgia Straight (Vancouver, BC), Published July 30, 2009 "Listening to the mad Gypsy sounds of Taarka's Seed Gathering for a Winter Garden is like a temporary escape from the mundane modern world into an exotic caravan traveling a fantastic world. The instrumentals range from the frenetic bluegrass stylings of the opening track, 'Artic Meltdown,' to the insistent, intricate interplay of guitar and violin on 'A Whole New You.' The vocal tracks are all smoky, seductive nuggets of Gypsy folk pop with dark undercurrents, similar to a less melodramatic DeVotchKa. There's not a bad track on the album, and the band wisely wraps with 'Vestal Flame,' easily the best of the batch. Blending Old World exoticism with thoroughly American folk and just a hint of a modern edge, Taarka conjures up a rich, detailed and delightful landscape." Cory Casciato, Westword (Denver, CO), Published April 15, 2009 "Seed Gathering' is full of forceful newgrass and folk that will catch the ear of any fan of solid musicianship." Lori Heuston, Mail Tribune (Medford, OR), Published March 27, 2009 "It's another great collection of tunes in the neo-stringband mode with David and his fiddling wife Enion Pelta-Tiller out front, drawing from just about any string style you can imagine to create songs that glitter like shimmering jewels. Good stuff." Bob Doran, North Coast Journal (Arcata, CA), Published March 26, 2009.

Here's what you say about
Taarka - Seed Gathering for a Winter Garden.