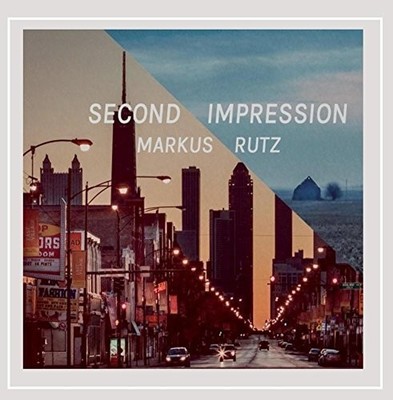 BLUES WRIGHT FROM THE PRAIRIE The musical form is a blues in triple meter with a couple of harmonic surprises. It depicts the character of Chicago - a prairie metropolis; urban and country which inspired an architectural design style blending land and cityscapes. The second chorus of the trumpet solo presents some 'Miles moments' for Markus Rutz, and Isaiah Spencer rounds out the solo section with his rhythmic and melodic drum statement. BLUE MODES (FROM THE UNDERDOG) Written with a chord progression borrowed from the1985 Wynton Marsalis recording title track, Black Codes (from the Underground), it continues the blues theme of the recording using phrases hinting at blues, and over chord changes of minor tonalities and the Phrygian mode. Brice Winston's tenor pronouncements showcase his effortless agility and astounding precision in executing the underlying rhythmic urgency of his solo. His solo ends with a tip of the hat toward Branford Marsalis referencing the now historic Black Codes recording. BRONZEVILLE BOSSA Bronzeville is a Southside neighborhood of Chicago and was historically a jazz and blues enclave for the city. It was there that world renowned bassist Richard Davis began his development in DuSable High School with famed band instructor Captain Walter Dyett. Not much time later, the bossa nova style found it's way into American jazz and is the style selected for this composition. The masterful musician touch and contribution of Paulinho Garcia on vocals and of course acoustic guitar grace this track as does the steady beautiful groove of Heitor Garcia on traditional Brazilian percussion. SAMBA OF THE BIG SHOULDERS The Brazilian theme on this track continues with musician siblings Paulinho Garcia and Heitor Garcia musician siblings originally from the country. The warmth and constancy of the beat is reflected in the title and acknowledge the diversity and cultural enrichment a metropolis attracts. The Samba employs a simple melodic riff in the main sections varying slightly in harmony, rhythm and melody. The bridge begins a contrasting swing feel ushered in by stellar, collective musician Greg Artry on the drums. Markus takes a warm and relaxed solo on flugelhorn especially throughout the opening phrases. The piano solo by Dennis Luxion exemplifies his musical sensibility and intellect with musical allusion. WATCHING DRYE PAINT About and for Markus's friend and amazing trumpeter Antoine Drye, 'Paint' is a musical depiction of an artist and person in everyday life. It is intended to express aspects of a personality in tones of warm melancholy, happily uplifting moments, down to earth practicality, spirituality, giving and appreciation. The recorded performance features an exquisite, arco bass expression by Jeff Pedraz to open the solo section. Continuing into the solos section, Brice Winston coasts his soprano saxophone onto the waltz groove with his entrance and then establishes a highly developed, swinging solo so full of passion and expression his lifts the band in the recording studio to a inspired level. A SHORTSTOP IN CLEVELAND The title a cousin of refers to Markus's grandmother whom he met at family gatherings - Lou Boudreau, the mid 20th century player-manager of the Cleveland Indians. The musical feel is a shuffle blues depicting a relaxed confidence in fundamental professionalism and personal character. In this recorded performance, Markus fills an accompaniment role played with a Harmon mute to blend with the electric guitar and tenor performing the unison melody line. The solo section is a feature for the hummingbird-like guitar embellishments and bluesy feeling of guitarist Scott Hesse and the historically reverential blues tenor of Brice Winston. RED BEANS AND BRICE Markus encountered many positives in his tenure in the City of New Orleans - people, places and FOOD, to name three. The title is amalgam of the three implying place and stating the other two. A person of Atticus Finch integrity as well as collective spirit and personability, Brice Winston has been a long term, true friend. Heard for many years with trumpeter and composer Terence Blanchard bands, Brice joined this group of Chicago and Detroit musicians for the recording. His professionalism and musicianship are essential elements in the soundscape of Second Impression. The main sections of Red Beans and Brice further evoke the Crescent City by borrowing a chord progressions from a Louis Armstrong theme called When It's Sleepytime Down South played here with a second line beat and feel. The music is propelled into the bridge section which then swings with originally composed chord changes and melodic material from Markus Rutz.

Here's what you say about
Markus Rutz - Second Impression.