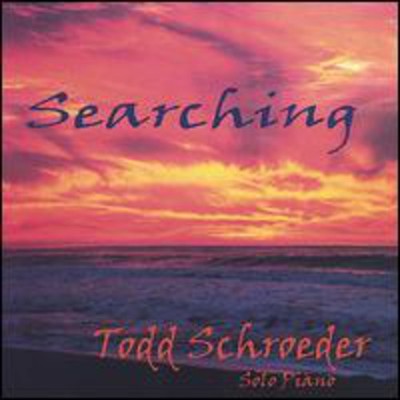 'Searching' is a collection of incredible piano instrumental songs. With all twelve original songs, Schroeder has produced clean sounds and textures, proving that his efforts were well worth the time invested. Opening the album is the inspiring 'Rising' which sets the listener on a journey of enlightenment. A sure favorite is 'An Irish Waltz' which creates images of dancing around a ballroom, swinging and swaying to the rhythm of the music. Demonstrating his ability to create many moods, 'Wedding Song' captures the beauty of this special day, while 'The Storm' pushes the tempo to a moody, somewhat frenzied mode. Whether your preference is the melodic 'Thinking of You', or the Jazz-Blues 'Midnight Sessions', this album will appeal to everyone who loves good music. Todd Schroeder began playing piano at the age of four. Growing up in a musical family, he was exposed to a wide variety of music ranging from Ray Charles to Neil Diamond but what he remembers most vividly is, at the impressionable age of eight, experiencing a musical awakening in the form of Jerry Lee Lewis. It was the beginning of a love affair that has never faded. Schroeder's accomplishments are as varied as his musical influences. Now living in Los Angeles, he works as a composer, musical director, arranger and conductor and has performed with such artists as Sam Harris, Rita Coolidge, Jason Alexander, Nell Carter and the legendary Angela Lansbury. Schroeder also serves as musical supervisor and consultant for major entertainment organizations including Disneyland, Knott's Berry Farm, Paramount Parks and Universal Studios. As a singer/songwriter, Schroeder has recorded three of his own C.D.'s with the newest due Spring 2004. His original compositions have been featured in film and television including daytime soap operas, the Lifetime Channel, Showtime and HBO. He has appeared on Oprah and Rosie and has performed at both Carnegie Hall and at the White House. Todd continues to travel and perform all over the world. In addition to countless charitable performances, he is the founder of the Todd Schroeder Young Artist Grant, an annual scholarship presented to students pursuing a career in the arts. For more information please visit ToddSchroeder.net or contact: other productions 1146 N. Central Ave. #452 Glendale, CA 91202 818-243-9633.

Here's what you say about
Todd Schroeder - Searching.