The Freemartins - Scientifically Engineered to Rock 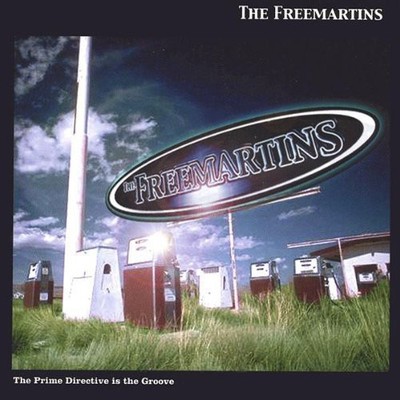 ORIGINS: HOW TO MAKE ONE MEAN BAND It's been a long, hard road that The Freemartins have traveled to get to where they are today. Theirs has been a journey littered with the detritus of the American Dream: one-legged hookers, monster hangovers, nights in jail, street fights, airbag deployments, broken windmills, regular shots of penicillin, and at least one possibly rabid iguana with a serious case of ADD. Yes, the Rock 'n Roll lifestyle has been tough on these four Portlanders, and with the rising cost of cheap thrills and liver transplants, it doesn't look like it's going to get any easier for them in the near future. But what the hell, that's what the Rock is all about. These boys aren't about to back away from the fight, put down the bottle, hock their instruments, and go snuggle up to the bosoms of their respective mothers; your mother's bosom, maybe, but certainly not theirs. No way. These guys are the real deal. Under various band names, every one of them has put in more than ten years of hard time on Portland's music scene, where they have demonstrated personal staying power, garnered widespread praise from critics and fans alike, and earned some serious street cred in the process. In short, they have paid their dues and then some, and fate has yet to wipe the maniacal grins from their faces. The Freemartins were first formed in the fall of 1998, and their hard-to-define Funk/Rock/Pop sound became famous for lighting more than a few asses on fire at clubs all across the Pacific Northwest. The ruckus generated at these drunken all-night booty shakes landed them some glowing reviews in music publications such as The Rocket, Two Louies, and Jam Magazine, not to mention stirring up a lot of chatter on the net. They even received a nod of recognition from none other than Erik Johnson of Parliament. Since then, they have trimmed down the band somewhat and moved away from the Funk, favoring the more straightforward one-two punch of red-hot, in your face Rock 'n Roll. After a short hiatus forced on them by their drummer's car accident and the temporary absence of their bass player, The Freemartins have come out of their corner swinging. With spot-on harmonies, intelligent lyrics, driving guitar, wicked hooks, and asshole-tight rhythm, I guarantee that these boys have the chops to knock your jaw to the floor.

Here's what you say about
The Freemartins - Scientifically Engineered to Rock.