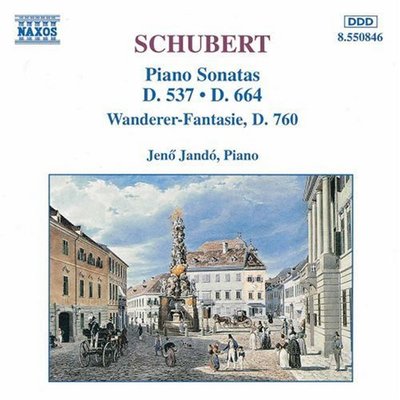 Schubert's Sonata in A major, D. 664, published posthumously in 1829 as Opus 120, has been plausibly dated to 1819, the year of the Trout Quintet. In the summer of that year Schubert had accompanied Vogl on his annual excursion to his native Steyr. There his acquaintance with Sylvester Paumgartner led to the composition of the quintet, making use of Schubert's song Die Forelle (The Trout), that Paumgartner much admired. It has been suggested that the Sonata in A major, which reflects much the same mood of delight in the Styrian countryside, is to be identified with a sonata written for the pianist Josefine von Koller, whom he met on the occasion of this first visit to Steyr. The first movement, with it's song-like principal theme, breathes the air of the country, it's serenity only briefly broken in the central development. The D major andante opens with some harmonic ambiguity, implicit in the principal theme, but any passing sadness is dispelled in the final Allegro. The so-called Wanderer Fantasia, the Fantasia in C major, Opus 15, D. 760, was written in November 1822 and published the following year. It was dedicated to Emmanuel, Edler von Liebenberg de Zsettin, a well-to-do pupil of Mozart's pupil Hummel. The popular name of the Fantasia, The Wanderer, is taken from the 1816 song of that name, a setting of words by Schmidt von Lübeck, the theme of which is varied in the slow movement of the Fantasia, a massive four-movement structure. The first movement of the Fantasia starts with a dactylic rhythmic figure, found so often in the music of Schubert. A subsidiary thematic element derived from this appears in the unexpected key of E major, with a further derivative in B flat, before still remoter keys are explored. The movement closes after preparing the new key of C sharp minor for the following adagio and the song-theme from which the Fantasia has taken it's name. This material is varied and developed, to be succeeded by an A flat major scherzo, again drawing on the same thematic resources. There is a trio section, while the final section, starting in A minor, finds it's way back to the original tonality of C major. In the last movement Allegro left hand octaves state the theme again, answered in fugal style by the right hand, before the entries of a third and fourth voice, leading on to a dynamic climax and a brilliant and emphatic C major conclusion.

Here's what you say about
F. Schubert - Piano Sonatas.