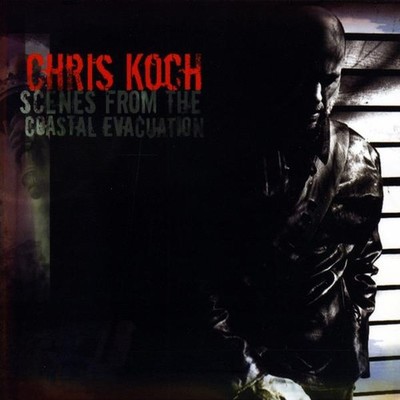 Though I would rather not paint it with colors from such a gloomy palate, the plain truth is that the 11 tracks on 'Scenes From the Coastal Evacuation' represent, for the most part, a descent into hopelessness that is sponsored by a grim projection of the future of the planet, which is in turn sponsored by the prevalence of what I perceive to be mass human stupidity. Okay... pretty cheery, eh? Some would refer to me as a pessimist, but I protest... I just need to see a bit more urgent "repentance" as fuel for my dormant optimism. I had a choice between two groups of music that I was working on, one being this set of dark, reflective musings on our current trajectory and the other being frivolous tunes about love and sex. I basically decided that I needed to do the first set first because (my reasoning went) love and sex would just become very strange and eventually obsolete in a world that is uninhabitable by large, complex organisms like Homo sapiens sapiens. And my personal opinion is that we're determinedly working toward such an uninhabitable state. Maybe, I thought, if I just came out and painted a black and ugly picture of the future that I saw, some would look at it and become inspired to work to alter that future -- not unlike the bright outcome of Ebenezer Scrooge's, I suppose. It's a long shot, I'll admit. We don't seem to be getting it, on any large scale. As Tommy Lee Jones' character "K" said in Men In Black, "A person is smart... people are dumb." All that being said, I believe that there are some very fine and even sublime musical moments on the entire collection. Her is a little on each track: 1) Heavy at Times - a bit of a local weather forecast that fits in well with the "Beleaguered Lady" on the back cover. (My friend Greg Gutbezahl did a nice job on the CD design, I think.) Double, bowed upright bass by Kevin Brown and Marc Schmied for an extremely heavy sound, and Ms. Mazz Swift-Camlet doing a fine job on violin. 2) Hell To Go - an ode to how we humans can get involved with things somewhat frivolously, and then find that we are quite trapped. Though most clearly about an addictive relationship, it is also about my personal experience in a fairly cultish religious organization, of course about chemical addictions, and certainly about our collective addiction to mass consumption. Seemed right when it all began. Now, not so much. Jim Stagnitto's trumpet is hauntingly beautiful. 3) Dead - the premise is a warning visit from someone "beyond" (one of Scrooge's spirits?), who thinks that if people gave more thought to the brevity of life and how easily theirs can be taken from them (instead of a determined pursuit of a career as harpist in The Heavenly Afterlife Choir), they would live differently for both themselves and others. Somewhat typically, I'm afraid, I use it as a vehicle for some socio-political and religious tirades. Mike Lee's tenor, embellishing. 4) Sad Song for Broken Times - a bit of a wild hair in the group, as it has a bit more of a folky feel. There is that triumvirate of tirades again. 5) Here We Go - Same themes, but with a bit of a softer tact, wrapped in a bossa groove. Ms. Mazz, adorning nicely again. Here we go... another chance to learn what we already know. 6) Song of Sorrow - the appeal holds to the main "Wake up! We've got to do something" theme, but adds an appeal regarding our "good stuff" - the idea that all of our great works of art and accomplishments become meaningless if there are no humans to interpret them. 7) Waste of Time - Well, if someone didn't quite get that they shouldn't bother inviting me to their church on Sunday, this one should do it. 8) Maintain Orbit - an epic piece that is most obviously about desire that cannot be consummated. It probes the idea that the moon desires to be with the earth intensely, but also knows that descending would wreak havoc. I hope also, though I think it's probably too subliminal, that it suggests the imagery of humans in space who are instructed not to land... we've poisoned her too completely. 9) Final Swim - inspired by an extremely tragic true-life event, this song attempts to explain the desperate pain that results in a person's decision to... em... "opt out". It was also written right around the time of Katrina, but I think the imagery there is already too far removed from our collective consciousness to make a connection. Between Ian Smit's ambiance and Jim Stagnitto's flugelhorn, I think it comes out appropriately watery. 10) Mentioned in Passing - a bittersweet instrumental number. 11) Diamond Through A Crack - my strange punctuation to the record. A sort of quasi-Irish drinking song that attempts to make light of the complete hopelessness at which one might arrive if one thinks into the future too far. If we change our ways, we can extend our days, but it only puts off the inevitable... no species gets to last forever. Well, we could create some lasting monument to the glory of human species so that someone in the future could learn about how noble and fine we were. But will they ever find us here, in this remote corner of space, and why would they bother to learn about the dead unknown anyway? In the end the entire, human experiment shall be like something beloved and precious, carelessly lost by someone that doesn't truly understand it's value. So there you have it... more information about this material then anyone is likely to be interested in knowing. Thanks, both of you, for reading it, and enjoy the CD.

Here's what you say about
Chris Koch - Scenes from the Coastal Evacuation.