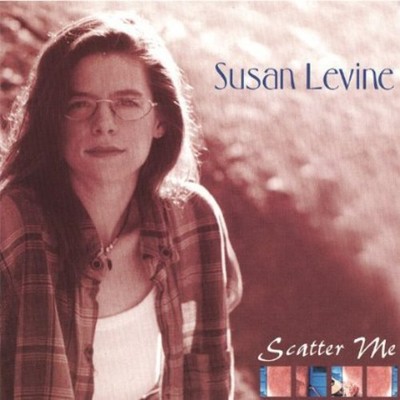 Susan Levine has been a regular on the Boston acoustic music scene since returning to the East Coast in 1998. She has been captivating audiences in such venues as the legendary Club Passim in Harvard Square, The Center for Arts in Natick, the Nameless Coffeehouse, the Cornerstone Coffeehouse and the New Song Folk Club. Susan was a finalist in the 2004 Rocky Mountain Folks Fest in Lyons Colorado, a finalist in the 2004 Rose Garden Coffeehouse Performing Songwriter Competition, a semi-finalist in the 2003 International Songwriting Competition, and was featured as an 'emerging artist' at the 2002 Falcon Ridge Folk Festival in Hillsdale, New York. She is currently working on a follow-up to her debut disc, 'Scatter Me.' The new CD, tentatively called 'Atlas,' will be ready for release in Fall of 2005. Originally from Medford, Massachusetts, Susan has traveled throughout the United States, living and playing music in such diverse places as New York, New Mexico and California. Her songs, informed by her extensive travels, are unique and memorable blends of folk, pop and country, suffused with poetic vision and sung with a distinctive voice described by Richard Fox of WCUW, 91.3 fm, Worcester, as 'flowing and expressive, powerful yet capable of wrapping you up with warmth and tenderness.' It is this voice that causes audiences to take notice. It is the poetry and heart in the lyrics, and the emotional investment in her performances that cause audiences to really listen and come back for more. Susan's debut CD, 'Scatter Me,' was released in November 2001 to a packed house at Club Passim. It's title song, 'Scatter Me,' is included on the 2002 Best of Boston Singer-Songwriter Compilation CD. Her song, 'Leaving' is included on a compilation CD, 'Features and Openers,' benefitting The Center for Arts in Natick. WUMB Folk Radio, 91.9 fm, Boston, currently has several of Susan's songs in rotation. She can also be heard on 'Women in Music,' a nationally syndicated radio show, and on several stations around the country. PRESS 'Susan is a literate and intelligent lyricist whose songs are laced with evocative images. Susan has a flowing and expressive voice, powerful, yet capable of wrapping you up with warmth and tenderness.' Richard Fox, WCUW, 91.3 fm, Worcester 'A wonderful songwriter and dynamic performer, thrilling audiences at the coffeehouses and open mics around town.' Matt Smith, Music Operations Manager, Club Passim, Cambridge, MA 'Susan writes compelling songs. She writes with a sense of honesty, humor and playfulness that is just infectious, and sings in a voice that will have you begging for more.' Eric Gerber, Singer-Songwriter, Kerrville, Texas AWARDS 2004 Rocky Mountain Folks Fest - Finalist 2004 Rose Garden Performiing Songwriter Competition - Finalist 2003 International Songwriting Competition - Semi-Finalist 2002 Falcon Ridge Folk Festival - Emerging Artist 2002 American Songwriter Magazine Lyric Competition - Honorable Mention 2001 Telluride Troubadour Competition - Honorable Mention for booking call: (617) 413-9864 or email: [email protected]

Here's what you say about
Susan Levine - Scatter Me.