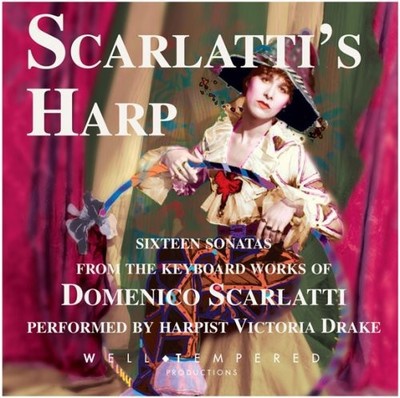 Victoria Drake's second solo album, Scarlatti's Harp is a collection of 16 of Domenico Scarlatti's 600-plus sonatas for keyboard. There is rumor of some having been written for specifically for the harp, but these 16 were chosen for their ease of transition to the harp as well as for their beauty. "Harpist Victoria Drake has plenty of passion - the sheer sensuality of plucking the strings with one's fingers ensures that. But Drake also responds to Scarlatti the same way I do. For instance, she exults in the thythmic drive of K 201 and the famous k159. In the slow sonatas (K 87, 466, and 207 above all), she has a vocal expressiveness impossible to achieve on the harpsichord but absolutely perfect for this music." - Robert Haskins, American Record Guide, Vol. 61, Issue 6, Nov/Dec 1998 "Transcriptions of Scarlatti's plentiful keyboard sonatas are very effective on the harp, much more so than on the lute or guitar. It seems odd that the CD era has not produced such a collection before. Victoria Drake gives enchanting, wholly unaffected readings in her timely set. The included works range from the familiar - the catchy Sonata in C Major, K.159, which every piano student knows - to the rare - the ethereal Sonata in A Major, K. 451. It would be unfair to the artist or the repertoire to relegate this disc to background music, but the combination of Scarlatii's engaging invention and the dulcet sound of the harp is undeniably soothing. The sonics are warm and intimate. Even alongside "authentic" renderings and the interpretive efforts of more famous performers, Drake's recording is one of the most pleasing Scarlatti recitals of late." - Anthony Gary Campbell, H&B Recordings Direct 1995 "What makes the all-Scarlatti album by New York-based harpist Victoria Drake so very attractive is the beautifully nuanced playing one hears, with notes in sequence always having shape and phrases making perfect musical sense. Her clearly defined rhythmic sense is excellent, and seldom is there an undue vestige of romanticism. Furthermore, almost all these arranged selections, including some fairly virtuosic examples, seem singularly well-suited to the harp, which also is warmly and naturally recorded without ever being over-reverberant." - Igor Kipnis, Stereophile, July 1995 "Scarlatti on the harp is almost as logical A. Scarlatti on the piano - "almost" because I miss the percussive/rhythmic element provided by both harpsichord and piano. The harp makes the music more gentle, more genteel, and less quirky than it really should be. But there is a lot of art and technique on display here; the mostly well-known sonatas emerge gracefully from Victoria Drake's skillful hands and fingers." - E.S., Stereo Review, May 1995 "Scarlatti is a somewhat obscure contemporary of Bach and Handel who deserves wider recognition. Sonatas were composed as especially intimate music, and played here on the harp, they are superb. The sound of the harp seems to me as gentle as a lover's whisper, making it a perfect instrument to convey the emotional nuances of the compositions. Fans of harp music and/or baroque msuic will snap this one up. Play it in your store to win over the uninitiated, without fail." - AR, NAPRA ReVIEW Summer 1995.

Here's what you say about
A. Scarlatti - Scarlatti's Harp.