William Allaudin Mathieu - Say I Am You 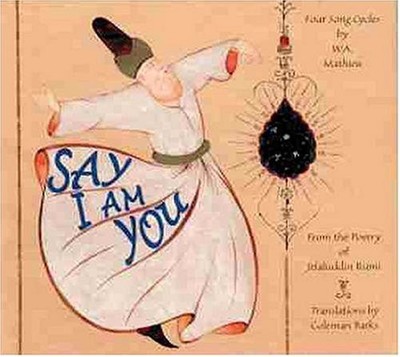 FOUR SONG CYCLES FROM THE POEMS OF JELALUDDIN RUMI Music & piano accompaniment by W. A. Mathieu English versions by Coleman Barks with John Moyne NOTES Until the early 1980s, the poetry of Jelaluddin Rumi was known to most English-speaking readers primarily through the sincere but Victorian translations of A. J. Arberry and R. A. Nicholson. I had tried to set some of these poems to music, but my adaptations felt awkward and contrived. In 1984, I read a new volume of Rumi poems called Open Secret, translated by poet Coleman Barks in collaboration with Farsi scholar John Moyne, and my relationship to words changed forever. Even at first reading, the lines lifted from the page as music itself, curling up as bright tropes and swirling phrases. I sensed these poems would set themselves, and, notwithstanding the detail that goes into any work, that's what happened. I phoned Coleman Barks in Athens, Georgia, and announced, 'You are my brother,' despite which we became long-time friends. In the meantime, I've set, with his blessing, dozens of his Rumi versions. Over and over again he shows me how language sings itself. Rumi (1207 - 1273) speaks of God as The Friend, the One we recognize in ourselves and each other. His poems were spontaneous, written down by his devotees as he spoke. Coleman brings them into our culture so we can respond to their immediacy. His translations of Rumi are now read by millions of grateful readers. SAY I AM YOU (1990) tracks 1 & 2 Devi Mathieu, soprano; Alfred Shabda Owens, tenor To Moineddin Jablonski IN THE ARC OF YOUR MALLET (1987) tracks 3 - 12 Devi Mathieu, soprano To Devi THE SPEECHLESS MOON (1989) tracks 13 - 15 Alfred Shabda Owens, tenor To Pandit Pran Nath EIGHT QUATRAINS (1988) tracks 16 - 24 Devi Mathieu, soprano Mihr'un'Nissa Douglass, alto W. Blake Derby, tenor Alfred Shabda Owens, tenor Shabda Kahn, bass, bass solo To Murshid Sam Lewis W. A. MATHIEU William Allaudin Mathieu (b. 1937) is a pianist, composer, teacher, recording artist, and author. He has composed a variety of chamber and choral works and made numerous solo piano recordings. He has written three books on music - The Listening Book; The Musical Life; and Harmonic Experience: Tonal Harmony from It's Natural Origins to It's Modern Expression. Allaudin was a disciple of North Indian vocalist Pandit Pran Nath for 25 years. He studied African music with Nubian musician Hamza El Din, jazz with William Russo, and European classical music with Easley Blackwood. In the 1960s, he spent several years as an arranger/composer for Stan Kenton and Duke Ellington, and was the musical director for the Second City Theater in Chicago (which he helped found) and for the Committee Theater in San Francisco. In the 1970s, he served on the faculties of the San Francisco Conservatory of Music and Mills College. In 1969 he founded the Sufi Choir, which he directed until 1982. The past two decades Allaudin has devoted to composition, performance, recording, teaching, and writing from his home near Sebastopol, California.

Here's what you say about
William Allaudin Mathieu - Say I Am You.