The Fantastic 5 - Saves the Universe Part 1 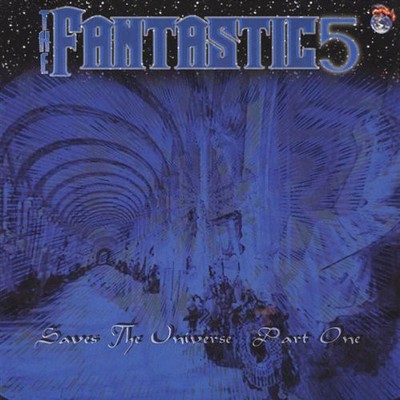 Artist History The Fantastic Five is the brainchild of singer/songwriter Tony Nassif and multi-instrumentalist/producer Roxana Camacho. The concept was launched in September 1999 by Tony and Roxy as a solo project dubbed under the moniker 'Tony Nassif'. They entered the studio together and after three months of recording they had their first EP,'Jealous Night' It was released during the summer of 2000 and was played on hundreds of college stations. 'Jealous Night' caused a stir in Peru as well, where it sold several thousand copies and to date continues to garner a great deal of radio airplay. Riding the wave of their success with 'Jealous Night', Tony and Roxy entered the studio once again with legendary South Florida producer Looch. The sessions for these next six songs took a grueling eight months. In the search for perfection the songs were massively layered with the help of a revolving lineup of piano players, horn sections, guitarists, and background vocalists. Songs featured up to 120 tracks of instrumentation, notably 'She Ain't Livin' Easy'. With the album complete, Tony and Roxy proceeded to take a train to New York through a massive blizzard to master the album with legendary mastering engineers Howie Weinberg and Roger Lian. Weathering the storm the duo came back with an incredible sounding CD featuring the track 'Carrie Anne'. Always in search of a band, Tony and Roxy had never been able to achieve the chemistry they were looking for. They auditioned drummers and bassists for over a year and none seemed to click. But in September 2001 they struck gold when drummer Mario Mesquita responded to an online classified ad. The three got together and poured over all of Tony's old tracks in addition to dozens of new ones. Mario was sold on the concept, and rehearsals were immediately scheduled. Then, in August 2002 Mario brought in bassist Scott Mudry whom he had also met through the internet to complete the quartet. The four quickly decided that the sound they were hearing was what they had all been searching for. The Fantastic 5 was soon gigging around the South Florida circuit and has since built a substantial local following. They released their debut album 'Saves the Universe Part 1' in December 2003. Group Members Tony Nassif - Tony is the lead vocalist, rhythm guitarist and the primary songwriting force behind The Fantastic 5. He is a veteran of the South Florida music scene, logging in hundreds of gigs from Miami to West Palm Beach. Tony's influences range from Bascom Lamar Lunsford, 'the great North Carolina old-timey legend', to obscure psychedelic 60's bands such as the Electric Prunes, Aorta, and the Poppy Family, to the pop genius of Brill Building, Curt Boettcher and Brian Wilson. Oh, and of course the Pixies! Roxana Camacho - Roxy is the lead guitarist, keyboardist, a backup vocalist, and producer. She was born to compose and perform her music. One of her earliest recollections is sitting between her mother and father in the car fiddling with the radio dial and then placing her ear to the speaker so she could hear everything that was going on in the music. She began playing piano and guitar at an early age. She quickly mastered both instruments andbecame interested in arrangement and classical music. This led her to study the works ofcomposers such as Mozart and Messiaen. She also became interested in the wall of sound production technique of Phil Spector, which she quickly applied to her own productions. Scott Mudry - Scott is the bassist, and a backup vocalist. He is a second generation musician possessing an extraordinary ear and a sense of rhythm and timing at par with the best. He is a seasoned musician and veteran of the Hampton Roads, Virginia music scene where he played in the same band for many years with his brother, drummer Joel Mudry of Bad Ace. During this time he developed an extraordinarily powerful and melodic style on the bass. He attributes this sound to his influences; Judas Priest, Iron Maiden, Rush, and Beethoven. Mario Mesquita - Mario is the drummer and the lifeblood of The Fantastic 5.Without his beat The Fantastic 5 would cease to exist. He is a veteran of the music scene in Rio having toured with many major bands there. He is also the most seasoned performer of the four, having played to crowds as large as 40,000 people. He is considered one of the premier drummers in the South Florida music scene, renowned for his versatility and his hard hitting style. His influences run the gamut from Brazilian pop icon Urbana, to Radiohead.

Here's what you say about
The Fantastic 5 - Saves the Universe Part 1.